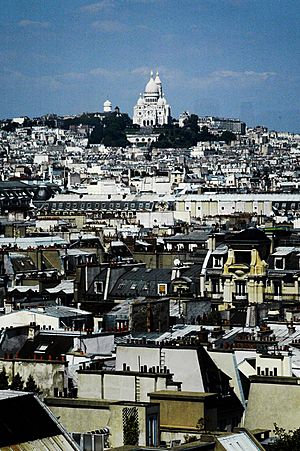 Montmartre is a hill 130 metres high and is also the name of the district which surrounds the hill. It is situated in the north of Paris and famous for its nightlife.

Many artists had studios or worked around the community of Montmartre such as Salvador Dalí, Claude Monet, Pablo Picasso and Vincent van Gogh.

Montmartre means 'mountain of the martyr'; it owes its name to the martyrdom of Saint Denis, who was killed on the hill around 250 AD. Saint Denis was the Bishop of Paris and is the patron saint of France.

The hill's religious symbolism is thought to be even older, as it has been suggested as a likely druidic holy place because it is the highest point in the area.

All content from Kiddle encyclopedia articles (including the article images and facts) can be freely used under Attribution-ShareAlike license, unless stated otherwise. Cite this article:
Montmartre Facts for Kids. Kiddle Encyclopedia.