Boa constrictor is a non-venomous Boa species. The snake can be found in Central and South America, and on some islands in the Caribbean. The common name is the same as the scientific name, which is unusual. The color pattern of its skin can vary considerably. Boa constrictors grow to a large size. There are ten subspecies. 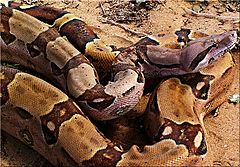 The size adult animals reach varies among subspecies. The largest animals have been found in Northern south America. Two animals from Suriname are currently the largest on record: One reached 411cm (13.5 ft), the other 427cm (a bit over 14 ft). Such sizes are rare, boas reaching 3m are considered large. There is a report of a boa reaching 5.6m in Trinidad, but it is believed that snake was an anaconda,Eunectes murinus, taken for a boa.

Boas can use their tail to grasp things. This is known as prehensility. Boas do not have organs that react to warmth around the mouth.

Boas have a color pattern that is brownish, and becomes brick red around the tail. Dorsally, the ground color is overlaid with a series of large tan-colored saddles that become lighter towards the tail. Here, the saddles break up into half rings of a pale cream color in vivid contrast with the red. 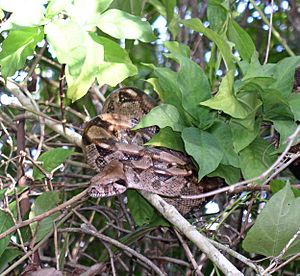 A boa constrictor in Belize

Depending on subspecies, Boa constrictor can be found through Central America (Belize, Guatemala, Honduras, El Salvador, Nicaragua, Costa Rica, and Panama) to South America north of 35°S (Colombia, Ecuador, Peru, Venezuela, Trinidad and Tobago, Guyana, Suriname, French Guiana, Brazil, Bolivia, Uruguay, and Argentina), and in the Lesser Antilles (Dominica and St. Lucia), on San Andrés, Providencia and many other islands along the coasts of Mexico and Central and South America. An introduced population exists in extreme southern Florida, and a small population on St. Croix in the US Virgin Islands now appears to be reproducing in the wild. The type locality given is "Indiis" – a mistake, according to Peters and Orejas-Miranda (1970).

B. constrictor flourishes in a wide variety of environmental conditions, from tropical rainforests to arid semidesert country. However, it prefers to live in rainforest due to the humidity and temperature, natural cover from predators, and vast amount of potential prey. It is commonly found in or along rivers and streams, as it is a very capable swimmer. Boa constrictors also occupy the burrows of medium-sized mammals, where they can hide from potential predators. 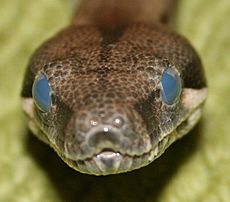 Boa constrictors generally live on their own, and do not interact with any other snakes unless they want to mate. They are nocturnal, but they may bask during the day when night-time temperatures are too low. As semi-arboreal snakes, young boa constrictors may climb into trees and shrubs to forage; however, they become mostly terrestrial as they become older and heavier. Boa constrictors strike when they perceive a threat. Their bite can be painful, especially from large snakes, but is rarely dangerous to humans. Specimens from Central America are more irascible, hissing loudly and striking repeatedly when disturbed, while those from South America tame down more readily. Like all snakes, boa constrictors in a shed cycle are more unpredictable, because the substance that lubricates between the old skin and the new makes their eyes appear milky, blue, or opaque, so that the snake cannot see very well, causing it to be more defensive than it might be otherwise.

Prey includes a wide variety of small to medium-sized mammals and birds. The bulk of their diet consists of rodents, but larger lizards and mammals as big as ocelots are also reported to have been consumed. Young boa constrictors eat small mice, birds, bats, lizards, and amphibians. The size of the prey item increases as they get older and larger.

Boa constrictors are ambush predators, so often lie in wait for an appropriate prey to come along, when they attack. However, they have also been known to actively hunt, particularly in regions with a low concentration of suitable prey, and this behaviour generally occurs at night. The boa first strikes at the prey, grabbing it with its teeth; it then proceeds to constrict the prey until death before consuming it whole. Unconsciousness and death likely result from shutting off vital blood flow to the heart and brain, rather than suffocation as was previously believed; constriction can interfere with blood flow and overwhelm the prey's usual blood pressure and circulation. This would lead to unconsciousness and death very quickly. Their teeth also help force the animal down the throat while muscles then move it toward the stomach. It takes the snake about 4–6 days to fully digest the food, depending on the size of the prey and the local temperature. After this, the snake may not eat for a week to several months, due to its slow metabolism.

Ovoviviparous, females give birth to live young that average 15-20 inches (38-51 cm) in length. 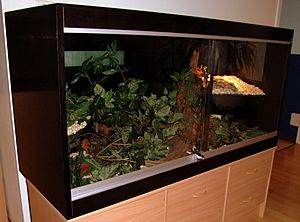 This species does well in captivity, usually becoming quite tame. It is a common sight in both zoos and private reptile collections. Though still exported from their native South America in significant numbers, they are widely bred in captivity. When kept in captivity, they are fed mice, rats, rabbits, chickens, and chicks depending on the size and age of the individual. Captive life expectancy is 20 to 30 years, with rare accounts over 40 years, making them a long-term commitment as a pet. The greatest reliable age recorded for a boa constrictor in captivity is 40 years 3 months and 14 days. This boa constrictor was named Popeye and died in Philadelphia Zoo, Pennsylvania, on April 15, 1977. Proper animal husbandry is the most significant factor in captive lifespan; this includes providing adequate space, correct temperatures and humidity, and suitable food items.

All content from Kiddle encyclopedia articles (including the article images and facts) can be freely used under Attribution-ShareAlike license, unless stated otherwise. Cite this article:
Boa constrictor Facts for Kids. Kiddle Encyclopedia.