His son was also a writer. He has his own page at Alexandre Dumas, fils

Alexandre Dumas (born Dumas Davy de la Pailleterie; 24 July 1802 – 5 December 1870) was a French writer. His works have been translated into many languages, and he is one of the most widely read French authors.

Many of his historical novels of high adventure were originally published as serials, including The Count of Monte Cristo, The Three Musketeers, Twenty Years After, and The Vicomte of Bragelonne: Ten Years Later. His novels have been adapted since the early twentieth century for nearly 200 films. Dumas' last novel, The Knight of Sainte-Hermine, unfinished at his death, was completed by scholar Claude Schopp and published in 2005. It was published in English in 2008 as The Last Cavalier. 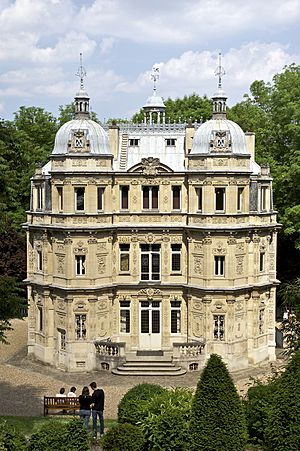 The castle of Monte-Cristo, the house of Alexandre Dumas, le Port-Marly, Yvelines, France

Young Alexandre loved books and he read everything he could get his hands on. Growing up, his mother's stories of his father's brave military deeds during the glory years of Napoleon gave Alexandre' a vivid imagination for adventure and heroes.

Although poor, the family still had the father's distinguished reputation and aristocratic connections and after the restoration of the monarchy, twenty-year-old Alexandre Dumas moved to Paris where he obtained employment at the Palais-Royal in the office of the powerful duc d'Orléans. 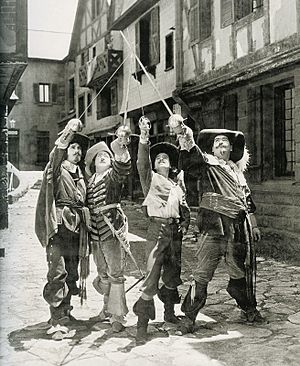 The Three Musketeers movie, based on Dumas novel 1921

Dumas began his career by writing plays, which were successfully produced from the first. He also wrote numerous magazine articles and travel books; his published works totalled 100,000 pages. In the 1840s, Dumas founded the Théâtre Historique in Paris. Young Alexandre acquired work with Louis-Philippe, Duke of Orléans, then as a writer, finding early success.

In 1851, Dumas left France for Belgium, where he stayed for several years, then moved to Russia for a few years before going to Italy. In 1861, he founded and published the newspaper L'Indépendent, before returning to Paris in 1864.

Despite Alexandre Dumas' success and aristocratic connections, his being of mixed-blood would impact on him all his life. In 1843, he wrote a short story that addressed some of the issues of race and the affects of colonialism. Nevertheless, inbred racist attitudes impacted his rightful position in France’s history long after his death on December 5, 1870. 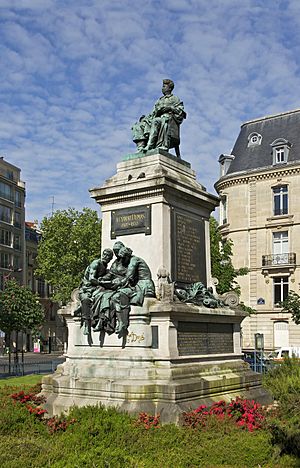 Buried in the place where he had been born, Alexandre Dumas remained in the cemetery at Villers-Cotterêts until November 30, 2002. Under orders of the French President, Jacques Chirac, his body was exhumed and in a televised ceremony, his new coffin, draped in a blue-velvet cloth and flanked by four men costumed as the Musketeers: Athos, Porthos, Aramis and D'Artagnan, was transported in a solemn procession to the Panthéon of Paris, the great mausoleum where French luminaries are interred.

In his speech, President Chirac said:

"With you, we were D'Artagnan, Monte Cristo or Balsamo, riding along the roads of France, touring battlefields, visiting palaces and castles -- with you, we dream."

In an interview following the ceremony, President Chirac acknowledged the racism that had existed, saying that a wrong had now been righted with Alexandre Dumas enshrined alongside fellow authors Victor Hugo and Voltaire.

The honor recognized that although France has produced many great writers, none have been as widely read as Alexandre Dumas. His stories have been translated into almost a hundred languages, and has inspired more than 200 motion pictures.

Alexandre Dumas' home outside of Paris, the Château Monte Cristo, has been restored and is open to the public.

All content from Kiddle encyclopedia articles (including the article images and facts) can be freely used under Attribution-ShareAlike license, unless stated otherwise. Cite this article:
Alexandre Dumas Facts for Kids. Kiddle Encyclopedia.