The Three Musketeers facts for kids 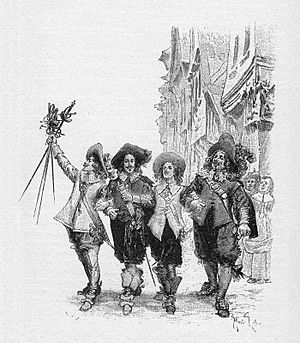 The Three Musketeers (French: Les Trois Mousquetaires) is a novel of adventure fiction by Alexandre Dumas, père. It is the story of a young man named d'Artagnan. He leaves home to become a musketeer of the guard of King Louis XIII of France. He and his friends Athos, Porthos, and Aramis live by the motto, "One for all, and all for one" (French: Un pour tous, et tous pour un!).

The story of d'Artagnan is continued in Twenty Years After and The Vicomte de Bragelonne. Those three novels by Dumas are together known as the D'Artagnan Romances.

The Three Musketeers was first published in serial form in the magazine Le Siècle between March and July 1844. All the books sold well and made plenty of money for Dumas. The story was later made into several plays and movies.

All content from Kiddle encyclopedia articles (including the article images and facts) can be freely used under Attribution-ShareAlike license, unless stated otherwise. Cite this article:
The Three Musketeers Facts for Kids. Kiddle Encyclopedia.