Kids Encyclopedia Facts
This page is about the son. For his father, also an author, see Alexandre Dumas.

Alexandre Dumas fils ( 27 July 1824 – 27 November 1895) was a French author and playwright, best known for the romantic novel La Dame aux Camélias (The Lady of the Camellias), published in 1848, which was adapted into Giuseppe Verdi's 1853 opera La traviata (The Fallen Woman), as well as numerous stage and film productions, usually titled Camille in English-language versions.

Dumas fils (French for 'son') was the son of Alexandre Dumas père ('father'), also a well-known playwright and author of classic works such as The Three Musketeers. Dumas fils was admitted to the Académie française (French Academy) in 1874 and awarded the Légion d'honneur (Legion of Honour) in 1894. 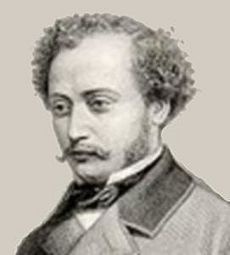 Alexandre Dumas fils, in his youth 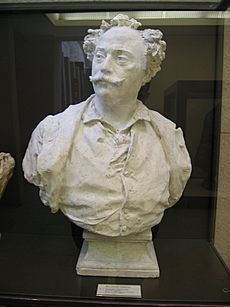 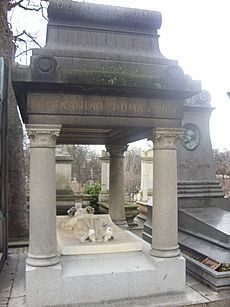 Dumas was born in Paris, France, the illegitimate child of Marie-Laure-Catherine Labay [ru] (1794–1868), a dressmaker, and novelist Alexandre Dumas. In 1831 his father legally recognized him and ensured that the young Dumas received the best education possible at the Institution Goubaux and the Collège Bourbon. At that time, the law allowed the elder Dumas to take the child away from his mother. Her agony inspired the younger Dumas to write about tragic female characters. In almost all of his writings, he emphasized the moral purpose of literature; in his play The Illegitimate Son (1858) he espoused the belief that if a man fathers an illegitimate child, then he has an obligation to legitimize the child and marry the woman (see Illegitimacy in fiction). At boarding schools, he was constantly taunted by his classmates because of his family situation. These issues profoundly influenced his thoughts, behaviour, and writing.

In 1844, Dumas moved to Saint-Germain-en-Laye, near Paris, to live with his father. There he met Marie Duplessis, a young courtesan who would be the inspiration for the character Marguerite Gauthier in his romantic novel La Dame aux camélias (The Lady of the Camellias). Adapted into a play, it was titled Camille in English and became the basis for Verdi's 1853 opera, La traviata, Duplessis undergoing yet another name change, this time to Violetta Valéry.

Although he admitted that he had done the adaptation because he needed the money, he had great success with the play, which started his career as a dramatist. He was not only more renowned than his father during his lifetime, but also dominated the serious French stage for most of the second half of the 19th century. After this, he virtually abandoned writing novels, though his semi-autobiographical L'Affaire Clemenceau (1867) achieved some solid success.

In 1874, he was admitted to the Académie française and in 1894 he was awarded the Légion d'honneur.

Dumas died at Marly-le-Roi, Yvelines, on 27 November 1895, and was interred in the Montmartre Cemetery in Paris. His grave is some 100 metres away from that of Marie Duplessis.

All content from Kiddle encyclopedia articles (including the article images and facts) can be freely used under Attribution-ShareAlike license, unless stated otherwise. Cite this article:
Alexandre Dumas fils Facts for Kids. Kiddle Encyclopedia.