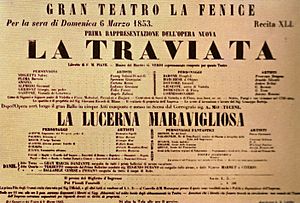 Poster for the world premiere of La traviata

La traviata is an Italian opera in three acts by Giuseppe Verdi, libretto by Francesco Maria Piave, after Alexandre Dumas, fils's novel La dame aux camélias, published in 1848. It was first performed at the Teatro La Fenice in Venice, on March 6, 1853. The title "La traviata" means literally The Woman Who Strayed, or perhaps more figuratively, The Fallen One. Although a failure at its premiere, the opera soon established itself and became one of the best-loved and most frequently performed, recorded and filmed of all operas. Notable interpreters of Traviata have included; Maria Callas, Anna Moffo, Renata Scotto, Beverly Sills, amongst many others.

All content from Kiddle encyclopedia articles (including the article images and facts) can be freely used under Attribution-ShareAlike license, unless stated otherwise. Cite this article:
La traviata Facts for Kids. Kiddle Encyclopedia.