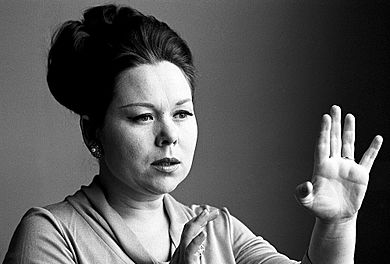 Renata Scotto in Milan in 1967 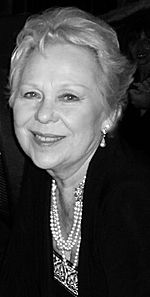 Renata Scotto (born on February 24, 1934) is an Italian operatic soprano who enjoyed a long and distinguished international career.

Born in Savona, Italy, she studied at the Milan Conservatory of Music, under Ghirardini and Merlini, and later in Rome with Mercedes Llopart. She made her stage debut in her hometown on Christmas Eve 1952, as Violetta in La traviata. After winning first place in a singing competition, she was invited to sing Violetta at the Teatro Nuovo in Milan on July 2, 1953, which led to her debut at La Scala, the following December, as Walter in Catalani's La Wally, opposite Renata Tebaldi and Mario Del Monaco. She quickly appeared in several other cities throughout Italy.

She sang in Cairo in 1956 and at The Stoll Theatre in London in 1957. That same year, she replaced Maria Callas in La sonnambula at the Edimburg Festival to considerable acclaim. This was the start of long and distinguished international career, with appearances in Chicago, San Francisco, Buenos Aires, Barcelona, Moscow, Tokyo, etc. She made her debut at the Metropolitan Opera in New York, on October 13, 1965, as Cio-Cio-San in Madama Butterfly and sang there regularly until 1987.

Scotto was mostly known for the Italian repertoire of which she sang a wide range of roles from bel canto to verismo. Although essentially a lyric soprano, as the years went on she tackled more dramatic roles in operas such as Norma, Macbeth, La Gioconda, Tosca, etc.

After retiring from the stage, she turned to teaching, coaching and stage directing. She is married to violonist Lorenzo Anselmi since 1960 and has two children.

All content from Kiddle encyclopedia articles (including the article images and facts) can be freely used under Attribution-ShareAlike license, unless stated otherwise. Cite this article:
Renata Scotto Facts for Kids. Kiddle Encyclopedia.