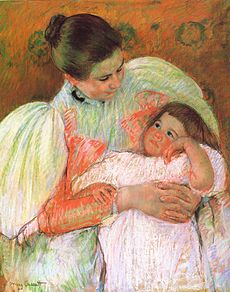 A child and her nanny

A nanny provides child care within the children's family setting. Traditionally, nannies were servants in large households and reported directly to the lady of the house.

Today, modern nannies, like other domestic workers, may live in or out of the house, depending on their circumstances and those of their employers.

A childminder works out of her own home. A mother's helper, who may live in or out, assists the woman of the house with general chores as well as caring for the children. The term au pair usually refers to an untrained young woman (or occasionally man), who comes from abroad to live in the host family and learn the local culture and language, while helping with the children. A governess concentrates on educating children inside their own home, and a Kindergarten or schoolteacher does the same, but in a school environment.

In the 19th and early 20th century, the position was usually known as a "nurse", and was, as for many childcare jobs, invariably female. In a great house (such as an English country house or town house), the nurse was a senior member of the household staff and ran her own domain, a suite of rooms called the nursery, supported by at least one assistant, known as a nursemaid (or nurserymaid).

Because of their deep involvement in raising the children of the family, nannies were often remembered with great affection and treated more kindly than the junior servants.

Nannies may have remained in the employment of the same aristocratic or gentry family for years, looking after successive generations of children. 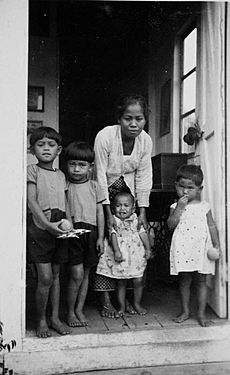 A baboe and the children in her care in the Dutch East Indies (now Indonesia). 1934

Nannies were present in the households of the administrators of European colonial empires throughout the world. It was a characteristic feature of colonial society that the children of European administrative officers were entrusted to the care of native women.

Nannies in colonial times spent their lives in the homes of their masters, often from childhood till old age, taking care of more than one generation, depending on the duration of the post. It was not uncommon for these nannies to be brought along with the family away from their native country when administrative officers were posted "home" or to another colony.

A "live-in" nanny is much less common than it once was though still ideal for a woman or man looking to move interstate or abroad for either a short period of time or to set themselves up. Typically, a live-in nanny is responsible for the entire care of the children of their employers. This includes anything from washing the children's clothes and tidying the children's rooms, to supervising homework and preparing children's meals, as well as taking children to and from school and after-school sport and/or activities. A live-in nanny is nowadays more common amongst wealthier families, because of their possible flexibility while they live where they work. A live-in Nanny will have all her living expenses paid and provided by the employer.

Some families use what is known as a 'nanny share', where two or more families pay for the same nanny to care for the children in each family on a part-time basis.

A more recent addition to the role of the nanny is that of the night nanny. Sleep specialists or consultants typically work with older babies and children. The night nanny usually works with a family anywhere from one night to seven nights per week. A night nanny generally works with children from newborn to five years of age. A night nanny can provide a teaching role, helping parents to establish good sleeping patterns or troubleshooting the sleeping patterns of a child. Roles and qualifications vary between countries. The Night Nanny works together with the family's requirements and philosophies.

Historically, European women were confined to their beds or their homes for extended periods after giving birth; care was provided either by her female relatives (mother or mother-in-law) or by a temporary attendant known as a monthly nurse. These weeks were called confinement or lying-in, and ended with the re-introduction of the mother to the community in the Christian ceremony of the churching of women. A modern version of this rest period has evolved, to give maximum support to the new mother, especially if she is recovering from a difficult labor and delivery.

Chinese and related East Asian traditions practice a form of postpartum confinement known as zuo yue zi "sitting the month". Newborn care specialists are referred to as yue sao. They have specialised knowledge of both baby care and Zuo Yue Zi, which are the Chinese traditions and customs regarding recovery from childbirth.

In Singapore and Malaysia, newborn care specialists are better known as confinement nanny. They assist the mother in taking care of the baby in order to let mother have a good rest.

Typically, women from their 20s to 60s take up employment as nannies. Some are younger, though normally younger workers are nursemaids or au pairs rather than nannies in the traditional use of the term.

A few positions are filled by men; the term manny is sometimes used for a male nanny, especially in the US and UK.

All content from Kiddle encyclopedia articles (including the article images and facts) can be freely used under Attribution-ShareAlike license, unless stated otherwise. Cite this article:
Nanny Facts for Kids. Kiddle Encyclopedia.