Domestic workers in the United States in 1914 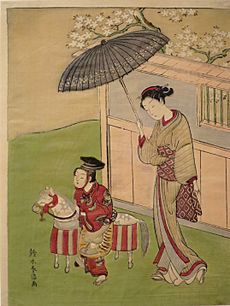 A servant minds her employer's child

In the early 20th century, new laws were made in Britain to protect domestic workers, and give them more rights. In the early 18th century, even some musicians were servants and had to wear livery (uniform). In 1717, when composer Johann Sebastian Bach said he wanted to leave his job, the duke he worked for put him in prison.

Today in many parts of the world domestic workers from poorer countries are often employed by people in the richer countries.

To ensure the right of decent work for all kind of domestic workers including migrant workers, International Labour Organization has made Convention No. 189 on domestic workers.

All content from Kiddle encyclopedia articles (including the article images and facts) can be freely used under Attribution-ShareAlike license, unless stated otherwise. Cite this article:
Domestic worker Facts for Kids. Kiddle Encyclopedia.