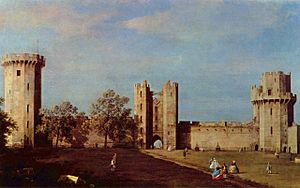 Warwick Castle (pron. 'Worrick') is a large castle in Warwickshire, England. It is near the town of Warwick. The castle was once the family home of the Earls of Warwick.

There are many rooms in the castle. Some of the rooms have mannequins in them that look like real people. These are dressed in costume. They are used to show how people might have lived in the castle hundreds of years ago. Warwick Castle has a dungeon. One part of the castle is said to be haunted. Actors play the part of the ghost and the servant who killed him in a dramatic "Spook Experience". Lights and sounds are used to add to the effect.

The castle has a very high wall walk. It can be explored, so that visitors can see from where the guards looked for enemies. A long, steep flight of steps leads up to the highest part of the castle where the flagpole is.

There are many paintings in the castle. There are portraits of English Kings and Queens as well as of members of the family who owned the castle. It is possible to see the private chambers, or bedrooms, where the family and their most important guests slept.

All content from Kiddle encyclopedia articles (including the article images and facts) can be freely used under Attribution-ShareAlike license, unless stated otherwise. Cite this article:
Warwick Castle Facts for Kids. Kiddle Encyclopedia.