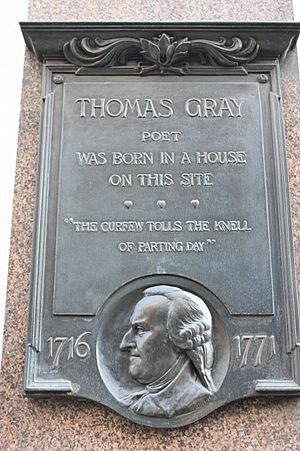 Thomas Gray (26 December 1716 – 30 July 1771) was an English poet, letter-writer, classical scholar, and professor at Pembroke College, Cambridge. He is widely known for his Elegy Written in a Country Churchyard, published in 1751.

Gray was a self-critical writer who published only 13 poems in his lifetime, despite being very popular. He was even offered the position of Poet Laureate in 1757, though he declined. His writing is conventionally considered to be pre-Romantic but recent critical developments deny such teleological classification.

All content from Kiddle encyclopedia articles (including the article images and facts) can be freely used under Attribution-ShareAlike license, unless stated otherwise. Cite this article:
Thomas Gray Facts for Kids. Kiddle Encyclopedia.