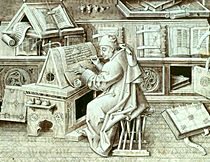 A European scribe at work

A scribe is an ancient occupation. A scribe's job involved reading and writing, especially during the Renaissance. Being a scribe meant writing letters, and historical records for kings, nobility, and temples. It was an important job when few people could read and write. Later, it changed into being secretaries, clerks: public servants, journalists, accountants and lawyers. Today, there are no scribes, but there are still authors and writers.

The Ancient Egyptian scribe was an important job. Ancient Egypt also had its painters and artisans who decorated tombs, buildings, furniture, statues, and other relics with pictures and hieroglyphics. In Ancient Egypt, only males could be scribes. This was so in many civilisations, because most official positions were exclusively male. 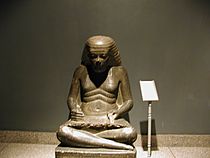 The scribes had to be able to write not only the hieroglyphs, but also the hieratic (priestly) script, and they had to know arithmetic. They used a type of paper called papyrus, made from reeds, and wrote with reed pens and ink.

All content from Kiddle encyclopedia articles (including the article images and facts) can be freely used under Attribution-ShareAlike license, unless stated otherwise. Cite this article:
Scribe Facts for Kids. Kiddle Encyclopedia.