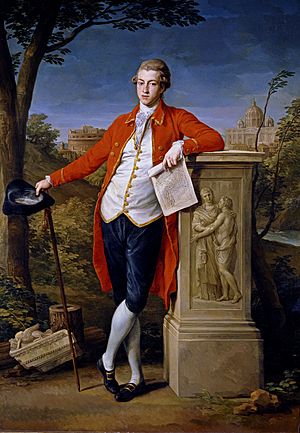 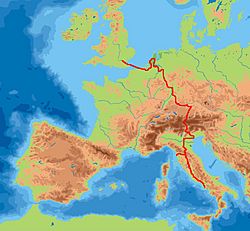 The Grand Tour was the name of travel through Europe by rich European (mostly British) young men between 1660 until about 1840. It was done to learn about European society and art. The idea was that what they learned on their travels could be used to help those that stayed at home. Italy was often the final country to visit. They would mostly travel with servants and a teacher called a bear-leader.

Which places the Grand Tour would visit changed through the years. An example would be a British tourist would go from Dover, England and crossed the English Channel to Ostend, in the Spanish Netherlands/Belgium, or Calais, or Le Havre in France.

There they could rent or buy a carriage and travel to Paris. Or they could make the trip by boat, traveling up the Seine to Paris, or up the Rhine to Basel.

In Paris, the traveler could take lessons in French, dancing, fencing, and horse riding. Paris was popular because of the language and fashion of French high society.

From Paris he would go to Switzerland for a while, often to Geneva. From there the traveler would make a difficult crossing over the Alps into northern Italy.

Once in Italy the tourist would visit Turin, then might spend a few months in Florence. Other Grand Tourists would be in Florence to welcome him. A trip to Pisa then on to Padua, Bologna, and Venice.

From Venice the traveler went to Rome to study the ruins of ancient Rome. Some travelers also visited Naples to study music. Naples was often the final destination before turning back.

From here the traveler went north through the Alps to the German-speaking parts of Europe. From there travelers visited Holland and Flanders before returning across the Channel to England.

All content from Kiddle encyclopedia articles (including the article images and facts) can be freely used under Attribution-ShareAlike license, unless stated otherwise. Cite this article:
Grand Tour Facts for Kids. Kiddle Encyclopedia.