Kids Encyclopedia Facts
This page is about the English town. For the larger local government district, see Dover (district). For other uses, see Dover (disambiguation).

Dover (/ˈdoʊvər/; French: Douvres) is a town and major ferry port in the home county of Kent, in South East England. It faces France across the strait of Dover, the narrowest part of the English Channel, and lies south-east of Canterbury; east of Kent's county town Maidstone; and north-east along the coastline from Dungeness and Hastings. The town is the administrative centre of the Dover District and home of the Dover Calais ferry through the Port of Dover. The surrounding chalk cliffs are known as the White Cliffs of Dover.

Its strategic position has been evident throughout its history: archaeological finds have revealed that the area has always been a focus for peoples entering and leaving Britain. The name of the town derives from the name of the river that flows through it, the River Dour. The town has been inhabited since the Stone Age according to archaeological finds, and Dover is one of only a few places in Britain – London, Edinburgh, and Cornwall being other examples – to have a corresponding name in the French language, Douvres.

There was a military barracks in Dover, which was closed in 2007. Although many of the former ferry services have declined, services related to the Port of Dover provide a great deal of the town’s employment, as does tourism. The prospect of privatising the sale of the Port of Dover to create increased cash flow for the government was given a recent ironic twist due to the rejection of a possible bid from the town of Calais in France after opposition in Dover against any sale forced the government to withdraw the Port from the market. Local residents had clubbed together to propose buying it for the community, more than 12,000 people have bought a £10 share in the People's Port Trust.

First recorded in its Latinised form of Portus Dubris, the name derives from the Brythonic word for waters (dwfr in Middle Welsh). The same element is present in the towns French (Douvres) and Modern Welsh (Dofr) forms, as well as the name of the river Dour and is evident in other English towns such as Wendover.

A 2013 study suggested the name may come from an ancient word for 'double bank' referring to the shingle spit(s) that formed across the harbour entrance, for which a word dover is still used in the Isle of Wight. Subsequent name forms included Doverre;

The current name was in use at least by the time of Shakespeare's King Lear (between 1603 and 1606), in which the town and its cliffs play a prominent role. The sight of the white cliffs when approaching Dover may have given the island of Britain its ancient name of Albion. 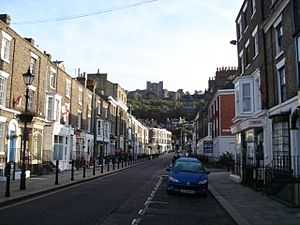 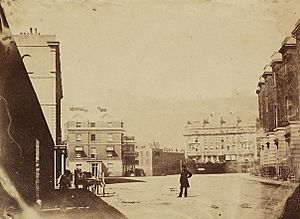 Dover’s history, because of its proximity to France, has always been of great strategic importance to Britain. Archaeological finds have shown that there were Stone Age people in the area; and that by the Bronze Age the maritime influence was already strong. Some Iron Age finds exist also, but the coming of the Romans made Dover part of their communications network. Like Lemanis (Lympne) and Rutupiae (Richborough) Dover was connected by road to Canterbury and Watling Street; and it became Portus Dubris, a fortified port. Forts were built above the port; lighthouses were constructed to guide passing ships; and one of the best-preserved Roman villas in Britain is here.

Dover figured largely in the Domesday Book as an important borough. It also served as a bastion against various attackers: notably the French during the Napoleonic Wars; and against Germany during the Second World War. It was one of the Cinque Ports during medieval times. 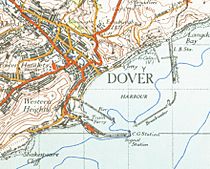 Dover is near the extreme south-east corner of Britain between Deal and Folkestone. At South Foreland, the nearest point to the continent, Cap Gris Nez near Calais is 34 kilometres (21 mi) away, across the Strait of Dover - because of this, the town is strongly associated with France

The site of its original settlement lies in the valley of the River Dour, making it an ideal place for a port, sheltered from the prevailing south-westerly winds. This led to the silting up of the river mouth by the action of longshore drift; the town was then forced into making artificial breakwaters to keep the port in being. These breakwaters have been extended and adapted so that the port lies almost entirely on reclaimed land.

The higher land on either side of the valley – the Western Heights and the eastern high point on which Dover Castle stands – has been adapted to perform the function of protection against invaders. The town has gradually extended up the river valley, encompassing several villages in doing so. Little growth is possible along the coast, since the cliffs are on the sea’s edge. The railway, being tunnelled and embanked, skirts the foot of the cliffs.

At the 2001 census, the town of Dover had 28,156 inhabitants, while the population of the whole urban area of Dover, as calculated by the Office for National Statistics, was 39,078 inhabitants.

With the expansion of Dover, many of the outlying ancient villages have been incorporated into the town. Originally the parishes of Dover St. Mary's and Dover St. James, since 1836 Buckland and Charlton have become part Dover, and Maxton (a hamlet to the west), River, Kearsney, Temple Ewell, and Whitfield, all to the north of the town centre, are within its conurbation.

The Dover lifeboat is a Severn class lifeboat based in the Western Docks. Dover Lifeboat station is based at crosswall quay in Dover Harbour. There is a Severn-class lifeboat, which is the biggest in the fleet. It belongs to the RNLI which covers all of Great Britain. The lifeboat number is 17-09 and has a lot of emergencies in the Channel. The Severn class is designed to lay afloat. Built from fibre reinforced composite (FRC) the boat is lightweight yet very strong and is designed to right itself in the event of a capsize.

There are three museums: the main Dover Museum, the Dover Transport Museum and the Roman Painted House. 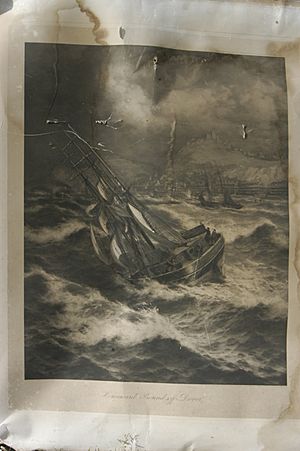 M.R. James used the Dover landmark the Lord Warden Hotel as a location in his short ghost story Casting the Runes first published in More Ghost Stories in 1911

All content from Kiddle encyclopedia articles (including the article images and facts) can be freely used under Attribution-ShareAlike license, unless stated otherwise. Cite this article:
Dover Facts for Kids. Kiddle Encyclopedia.