St James' Church is a ruined church in Dover, England. It was built in the 11th century and restored in the 19th century. Badly damaged in the Second World War, it is now preserved as a Grade II listed building.

It was originally a Norman building: the Norman arch, with typical chevron patterns, can still be seen.

The church was mentioned in the Domesday Monachorum, compiled in the time of Lanfranc who was Archbishop of Canterbury from 1070 to 1089. This book, a text related to the Domesday Book, mentions it as one of the churches in Dover.

It was a meeting place of the official courts of the Barons of the Cinque Ports; they met in an addition to the south side of the nave, built in the 14th century. The last such meeting held here took place in 1851, presided over by the Duke of Wellington who was Lord Warden of the Cinque Ports.

A new church was built from 1860–1862 to replace this church, which had become too small for the congregation. The new building was a short distance to the north, where more space was available, on Maison Dieu Road. The old church was closed in 1862; however, it was restored in 1869, and an organ was installed. 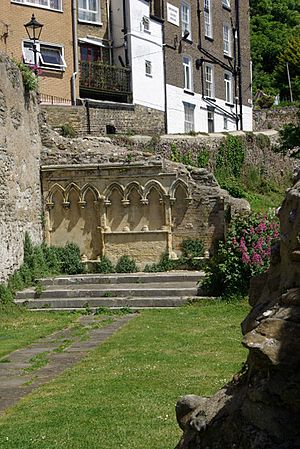 Part of the interior of the church

The old building was damaged during the First World War: on 19 March 1916 a seaplane dropped bombs which fell nearby, and splinters from the blast caused damage to the roof. It was restored in 1931.

Both buildings were severely damaged by German artillery firing across the English Channel during the Second World War. The church on Maison Dieu Road was demolished in 1953. The tower of the old church, already badly damaged, collapsed on 2 May 1951; the building was then made safe and preserved as a "tidy ruin".

All content from Kiddle encyclopedia articles (including the article images and facts) can be freely used under Attribution-ShareAlike license, unless stated otherwise. Cite this article:
St James' Church, Dover Facts for Kids. Kiddle Encyclopedia.