Dame Vera Margaret Lynn CH DBE OStJ (née Welch; 20 March 1917 – 18 June 2020) was a British singer, songwriter and entertainer whose musical recordings and performances were largely popular during the Second World War. She was widely known as "the Forces' Sweetheart" and gave outdoor concerts for the troops in Egypt, India, and Burma during the war as part of Entertainments National Service Association (ENSA). The songs most associated with her are "We'll Meet Again", "The White Cliffs of Dover", "A Nightingale Sang in Berkeley Square" and "There'll Always Be an England".

She remained popular after the war, appearing on radio and television in the United Kingdom and the U.S. and recording such hits as "Auf Wiederseh'n, Sweetheart" and her UK number one single "My Son, My Son". Her last single, "I Love This Land", was released to mark the end of the Falklands War. In 2009, at the age of 92, she became the oldest living artist to top the UK Albums Chart with the compilation album We'll Meet Again: The Very Best of Vera Lynn. In 2014, she released the collection Vera Lynn: National Treasure and in 2017, she released Vera Lynn 100, a compilation album of hits to commemorate her centennial year—it was a #3 hit, making her the first centenarian performer to have a Top 10 album in the charts.

Lynn devoted much time and energy to charity work connected with ex-servicemen, disabled children and breast cancer. She was held in great affection by veterans of the Second World War and in 2000 was named the Briton who best exemplified the spirit of the 20th century.

Vera Lynn's album We'll Meet Again: The Very Best of Vera Lynn peaked #1 in the United Kingdom making her the oldest living artist to top the U.K. album charts. The album is some of her recordings made for Decca Records, for whom Lynn recorded between 1936 and 1959. It reached number one on the UK Albums Chart on 13 September 2009. The album entered the chart at number 20 on 30 August, and then climbed to number 2 the following week, before reaching the top position. 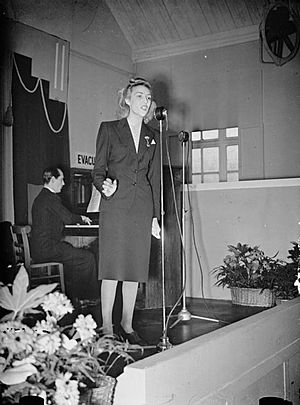 Lynn sings at a munitions factory in 1941

All content from Kiddle encyclopedia articles (including the article images and facts) can be freely used under Attribution-ShareAlike license, unless stated otherwise. Cite this article:
Vera Lynn Facts for Kids. Kiddle Encyclopedia.