Dover is the capital and second-largest city in the U.S. state of Delaware. It is also the county seat of Kent County, and the principal city of the Dover, DE Metropolitan Statistical Area, which encompasses all of Kent County and is part of the Philadelphia-Wilmington-Camden, PA-NJ-DE-MD Combined Statistical Area. It is located on the St. Jones River in the Delaware River coastal plain. It was named by William Penn for Dover in Kent, England. As of 2010, the city had a population of 36,047.

Dover was founded as the court town for newly established Kent County in 1683 by William Penn, the proprietor of the territory generally known as the "Lower Counties on the Delaware." Later, in 1717, the city was officially laid out by a special commission of the Delaware General Assembly. The capital of the state of Delaware was moved here from New Castle in 1777 because of its central location and relative safety from British raiders on the Delaware River. Because of an act passed in October 1779, the assembly elected to meet at any place in the state they saw fit, meeting successively in Wilmington, Lewes, Dover, New Castle, and Lewes again, until it finally settled down permanently in Dover in October 1781. The city's central square, known as The Green, was the location of many rallies, troop reviews, and other patriotic events. To this day, The Green remains the heart of Dover's historic district and is the location of the Delaware Supreme Court and the Kent County Courthouse.

Dover was most famously the home of Caesar Rodney, the popular wartime leader of Delaware during the American Revolution. He is known to have been buried outside Dover, but the precise location of his grave is unknown. A cenotaph in his honor is erected in the cemetery of the Christ Episcopal Church near The Green in Dover.

Dover and Kent County were deeply divided over the issue of slavery, and the city was a "stop" on the Underground Railroad because of its proximity to slave-holding Maryland and free Pennsylvania and New Jersey. It was also home to a large Quaker community that encouraged a sustained emancipation effort in the early 19th century. There were very few slaves in the area, but the institution was supported, if not practiced, by a small majority, who saw to its continuation.

Dover has a warm temperate climate or humid subtropical climate (Köppen Cfa). Summers are hot and humid, with 23 days per year reaching or surpassing 90 °F (32 °C). Brief, but heavy summer thunderstorms are common. Winters are moderated by the Delaware Bay and the partial shielding of the Appalachians, though there are normally 8−9 days when the daily high remains below freezing and 15 nights with lows below 20 °F (−7 °C). Snow is typically light and sporadic, averaging only 15.7 inches (40 cm) per season, and does not usually remain on the ground for long. Spring and autumn provide transitions of reasonable length and are similar, though spring is more wet. The monthly mean temperature ranges from 35.2 °F (1.8 °C) in January to 77.7 °F (25.4 °C) in July. The annual total precipitation of around 46 inches (1,170 mm) is spread rather evenly year-round. Dover averages 2300 hours of sunshine annually. 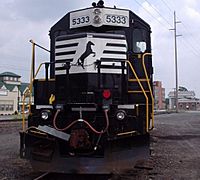 A Norfolk Southern GP38-2 parked on the team track in Dover with the old railroad depot in background.

The main north–south highway through Dover is U.S. Route 13, which runs through the main commercial strip of Dover on the multi-lane, divided Dupont Highway. An alternate route of U.S. Route 13, U.S. Route 13 Alternate, passes through downtown Dover on Governors Avenue. The Delaware Route 1 turnpike, which provides the main route to Wilmington and the Delaware beaches, passes to the east of Dover. It ends near the Dover Air Force Base and DE 1 continues south on Bay Road. U.S. Route 113 formerly ran along Bay Road from Milford to US 13 near the State Capitol Complex, however it was decommissioned in 2004 to avoid the concurrency with DE 1 between the Dover Air Force Base and Milford. Delaware Route 8 is the main east–west route through Dover, passing through downtown on Division Street and West Dover on Forrest Avenue. It continues west toward Maryland to provide access to the Chesapeake Bay Bridge. Dover is one of only four state capitals not served by an Interstate highway. Pierre, South Dakota; Jefferson City, Missouri; and Juneau, Alaska are the other three state capitals with this distinction.

Dover Air Force Base is located within the southeast corporate limits of Dover. Airports near Dover with commercial air service include the Wicomico Regional Airport in Salisbury, Maryland, the Baltimore-Washington International Thurgood Marshall Airport in Baltimore, Maryland, and the Philadelphia International Airport in Philadelphia. Other airports near Dover include Chandelle Estates Airport to the northeast of the city, Delaware Airpark near Cheswold, and Jenkins Airport near Wyoming.

Dover is located on a former Pennsylvania Railroad line, which is now served by the Delmarva Central Railroad, having taken over operations from Norfolk Southern in 2016. At one time Dover had a daily Amtrak passenger service; however, the line now is just used for local freight. The closest passenger rail station is the Amtrak station in Wilmington.

Greyhound Lines are provided as inter-city bus transportation, with a bus stop at the 7-Eleven store along U.S. Route 13 in the northern part of Dover.

The former Dover Opera House, built in 1904, was renovated and converted to the Schwartz Center for the Arts, which hosts performances by the Dover Symphony Orchestra, ballet, and classic films.

Dover is also home to The Children's Theatre, Inc. of Dover and Kent County, a non-profit organization.

In Dover's historical district is the Sewell C. Biggs Museum of American Art, featuring collections from the Colonial days to the present.

An Amish community resides to the west of Dover, with several Amish businesses.

All content from Kiddle encyclopedia articles (including the article images and facts) can be freely used under Attribution-ShareAlike license, unless stated otherwise. Cite this article:
Dover, Delaware Facts for Kids. Kiddle Encyclopedia.