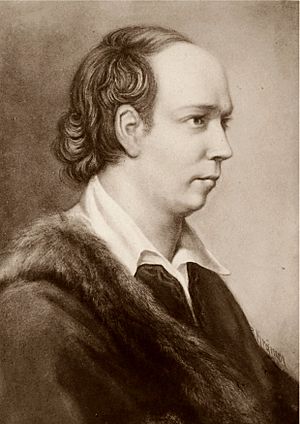 A portrait of author Oliver Goldsmith

Oliver Goldsmith (10 November 1730 – 4 April 1774) was a writer, poet, and physician famous for his novel, The Vicar of Wakefield(1776). He first successful literary work was The Traveller (1764), a poem about British rule. Like Jonathan Swift, Goldsmith criticized society, but he did not use satire like Swift. Goldsmith's greatest poem, The Deserted Village (1770), was a sad poem about how country life was being destroyed by landowners. The same theme is inside The Vicar of Wakefield. Goldsmith's biggest work at that time was The Citizen of the World (1762), a collection of soft-satire essays on English life seen by an imaginary Chinese visitor. He also wrote two plays, The Good Natured Man (1768), and She Stoops to Conquer (1773).(He is also thought to have written the classic children's story, The History of Little Goody Two-Shoes.) 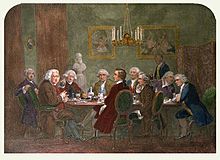 A literary party at Sir Joshua Reynolds's. The person in the blue coat on the right is Oliver Goldsmith - use cursor to identify others.

It is not known for sure when he was born. Most people now think that he was born in 10 November 1730. He was the second son of Charles Goldsmith, curate of Kilkenny West in West Meath in Ireland. In 1745 he went to Trinity College Dublin. He quickly spent all his money by gambling, which he became addicted to. After spending some time at the Universities of Edinburgh and Leyden he spent 1755 – 1756 travelling in Europe, where it is said that he lived by playing the flute. Before starting to write he worked in London as a doctor's helper, a doctor, and a school usher. He died in 1774 and was buried in Temple Church.

All content from Kiddle encyclopedia articles (including the article images and facts) can be freely used under Attribution-ShareAlike license, unless stated otherwise. Cite this article:
Oliver Goldsmith Facts for Kids. Kiddle Encyclopedia.