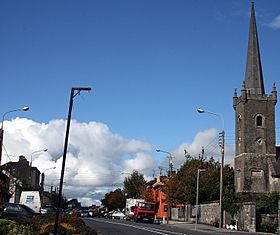 Ballymahon (Irish: Baile Uí Mhatháin, meaning Mahon's town) on the River Inny is a town in the southern part of County Longford, Ireland. It is located at the junction of the N55 National secondary road and the R392 regional road.

Ballymahon derives its name from Gaelic Baile Mathuna (Town of Mahon). This may refer to Mahon (Mathgamain mac Cennétig), a southern chieftain and the elder brother of Brian Boru, who is believed by some to have fought a battle in 960 in the vicinity of Ballymahon at Shrule (in Irish Sruaith Fhuil, River of Blood) where he defeated O'Rourke of Cavan and laid claim to lands in the area. This is disputed by others who claim Mahon may relate to a sub chieftain of the O'Farrells who ruled over this part of County Longford in the 14th century.

The earliest documentary evidence of Ballymahon was in the year 1578. The map of the Down Survey (1654) by Sir William Petty shows Ballymahon as a group of houses situated at the southern end of the present town, on the right bank of the River Inny. 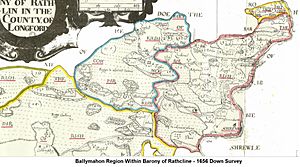 Ballymahon Region within Barony of Rathcline - Down Survey 1659

Two main families, the Shuldham family of Moigh House and the King-Harman family of Newcastle House, developed the town in the mid-nineteenth century. The buildings in the town are of late Georgian architecture, with two and three storey gabled houses, colour-washed and in rows of three and four. A special feature of the town is its wide main street. From 1788 to 1853 the Roman Catholic bishops of Ardagh and Clonmacnoise resided in the town and the parish church served as a Pro-Cathedral until St. Mel's Cathedral was built in Longford.

The River Inny, a tributary of the River Shannon, flows westwards through Ballymahon in the direction of Lough Ree three miles from the town. A stretch of the Inny from Newcastle Bridge to Ballymahon town is a renowned route for beginner to intermediate kayaking, canoeing and time trials. 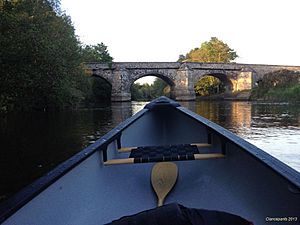 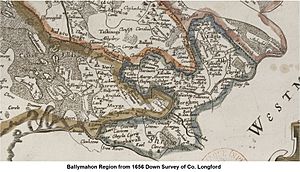 The Royal Canal also passes westwards through Ballymahon from Dublin to Clondra, County Longford. Following extensive works the canal has recently been restored and is now fully navigable. 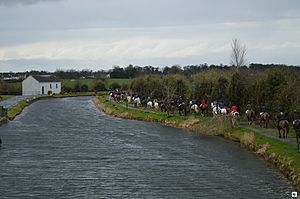 Brannigan Harbour, c.1 km from Ballymahon town, is the most notable location on the Royal Canal in the area and is a convenient location for boats and barges to stop and pass and has also become very popular as a venue for water-sports. 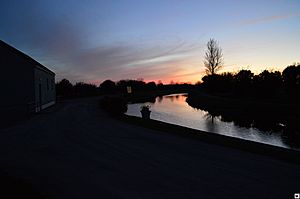 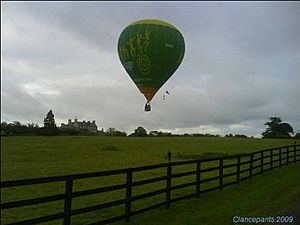 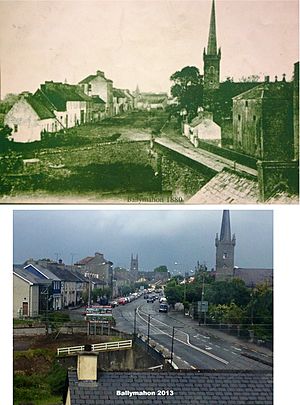 All content from Kiddle encyclopedia articles (including the article images and facts) can be freely used under Attribution-ShareAlike license, unless stated otherwise. Cite this article:
Ballymahon Facts for Kids. Kiddle Encyclopedia.