Kids Encyclopedia Facts
This page is about the Irish town. For other uses, see Longford (disambiguation).

Longford (Irish: An Longfort) is the county town of County Longford in Ireland. It has a population of 10,310 according to the 2016 census. It is the biggest town in the county and about one third of the county's population lives there. Longford lies at the meeting of Ireland's N4 and N5 National Primary Route roads, which means that traffic travelling between Dublin and County Mayo or North County Roscommon passes around the town. The station in Longford on the Dublin-Sligo line is important for commuters.

The town is built on the banks of the River Camlin (from Irish: Camlinn, meaning "crooked pool"), which is a tributary of the River Shannon. The name Longford is an anglicisation of the Irish Longphort, from long (meaning "ship") and port (meaning "port" or "dock"). This name was applied to many Irish settlements of Viking origin and eventually came to mean fort or camp in the Irish language, and so Longfort the modern Irish spelling, is the name of this town, which was one of the only Gaelic Irish market towns to arise without first being founded by Vikings or Normans.

The area came under the sway of the local clan which controlled the south and middle of the County of Longford (historically called Anghaile or Annaly) and hence, the town is sometimes called Longfort Uí Fhearghail (fort/stronghold of O'Farrell).

A Dominican priory was founded there in 1400.

The Corlea Trackway Visitor Centre is located near to Longford, in Keenagh. The Centre houses an Iron Age bog road which was built in 148 BC across the boglands in proximity to the River Shannon. The oak road is the largest of its kind to have been uncovered in Europe and was excavated over the years by Professor Barry Raftery of University College Dublin. Inside the building, an 18-metre stretch of preserved road is on permanent display in a specially designed hall with humidifiers to prevent the ancient wood from cracking in the heat. Bord na Mona and the Heritage Service have carried out conservation work on the surrounding bog to ensure that it remains wet and that the buried road is preserved. There are other historical artefacts and some exhibits at the centre. 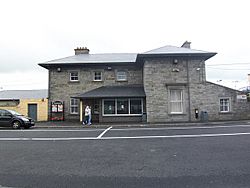 St. Mel's Cathedral in the town features several stained glass windows by Harry Clarke studios. These include one of his earliest works The consecration of St. Mel as Bishop of Longford which was exhibited at the RDS Annual Art Industries Exhibition in 1910, where it received second prize. It was also exhibited at The Arts and Crafts Society of Ireland fourth exhibition in the same year. The Cathedral was extensively damaged in a fire on Christmas Day 2009. St. Mel's Cathedral remained closed for exactly five years following the fire while it was the centre of one of the largest restoration projects undertaken in Europe. It reopened for services at midnight mass on Christmas Eve 2014 and has since become a significant tourist attraction. The two most intricated stained-glass windows in the transepts of the Cathedral have been faithfully restored – these depict St Anne and the Resurrection.

Longford town boasts a state-of-the-art 212-seat theatre called Backstage Theatre just outside of the town, and a four-screen multiplex cinema, with restaurants. The mix and quality of housing is extensive and the Rural Renewal Hi Scheme (1999–2006) has ensured that a steady supply of residential development has come about. Longford town has a decentralised government department which employs approximately 300 people and a further 130 are employed at the Irish Prison Service's headquarters in the Lisamuck area of the town. The Prison Service HQ boasts a sculpture by renowned artist Remco de Fou which, apart from the Spire in Dublin is the largest piece of sculpture in Ireland. Connolly Barracks once employed approximately 180 soldiers, many of whom were involved in UN peace-keeping duties, until the barracks closed in January 2009.

The town serves as the cathedral town of the Roman Catholic Diocese of Ardagh and Clonmacnoise. St Mel's Cathedral, dedicated to Saint Mel, the founder of the diocese of Ardagh, was designed by architect John Benjamin Keane, who also designed St. Francis Xavier's Church on Gardiner Street in Dublin.

There are a number of portal dolmens located around Longford.

Longford is at the point of divergence of the N5 road to Castlebar/Westport/Ireland West Airport Knock and the N4 road which continues onwards to Sligo.

N5 road used to go through the town & there was a little traffic congestion except at peak times and this is mainly due to the traffic system of the town which has a number of one-way streets and traffic signals before N5 Longford bypass which was completed on 3 August 2012.

The N4 Sligo road has a bypass around the town, which consists of single carriageway with hard shoulders and four roundabouts. It was opened on 2 June 1995 and constitutes part of the planned Longford Ring Road which will encircle the town when completed. 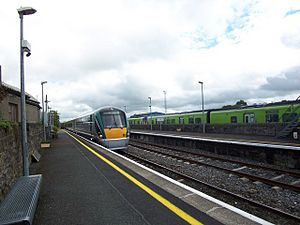 The Sligo train calling at Longford.

Longford is about 91 kilometres (57 mi) from Sligo and 122 km (76 mi) from Dublin. It lies on the Dublin-Sligo line of the Irish railway network, and is served by Sligo-Dublin intercity services. Despite its distance from Dublin, the town also has a regular, well-utilised commuter service to Dublin. Journeys to Dublin Connolly by rail generally take about an hour and three-quarters. Longford railway station opened on 8 November 1855.

The Royal Canal reopened in October 2010 after years of being derelict and overgrown. Navigation is now possible from Spencer Dock, in Dublin, to the Shannon, in Clondra.

There are a large number of bus services to Dublin and other towns both outside and inside the county provided by both the state (Bus Éireann) and private bus companies (Kane's, Donnelly's and Farrelly's.) Third level colleges are well served by the private companies during the academic year.

Donnelly's Pioneer Bus Service, a longstanding local bus company based in Granard, operate a route from Longford to Granard via Ballinalee. There are three journeys each way daily (no Sunday service)

Whartons Travel, which is also a longstanding local bus service, operate a route from Longford railway station and Longford to Cavan via Drumlish, Arvagh and Crossdoney. As of 2014, this service is funded by the National Transport Authority.

Climate in this area has mild differences between highs and lows, and there is adequate rainfall year-round. The Köppen Climate Classification subtype for this climate is "Cfb" (Marine West Coast Climate/Oceanic climate).

All content from Kiddle encyclopedia articles (including the article images and facts) can be freely used under Attribution-ShareAlike license, unless stated otherwise. Cite this article:
Longford Facts for Kids. Kiddle Encyclopedia.