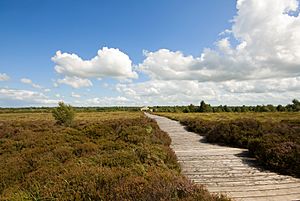 County Longford (Irish: Contae an Longfoirt) is a county in Ireland. It is part of the Midlands Region and is in the province of Leinster. It is named after the town of Longford. Longford County Council is the local authority for the county. The population of the county is 40,810 according to the 2016 census.

Most of Longford lies in the basin of the River Shannon with Lough Ree forming much of the county's western boundary. The north-eastern part of the county, however, drains towards the River Erne and Lough Gowna. Lakeland, bogland, pastureland, and wetland typify Longford's generally low-lying landscapes: the highest point of the county is in the north-west - Carn Clonhugh (also known as Cairn Hill) near Drumlish at 279 m (916 feet). Cairn Hill is the site of a television transmitter broadcasting to much of the Irish midlands.

In the list of Irish counties by highest point, Longford ranks third lowest. Only Meath and Westmeath have lower maxima. In general, the northern third of the county is hilly, forming part of the drumlin belt and Esker Riada stretching across the northern midlands of Ireland. The southern parts of the county are low-lying, with extensive areas of raised bogland and the land being of better quality for grazing and tillage. The River Shannon marks the county's border with Roscommon while the Rivers Inny and Tang form much of the boundary with Westmeath.

The Royal Canal flows through the south of the county terminating at Cloondara at the Shannon. The canal was refurbished and reopened in 2010. Notable lakes include Kinale Lough and Lough Gowna on the Cavan border, Lough Forbes on the Roscommon border and of course Lough Ree in the south where Longford, Westmeath and Roscommon meet. With a population of 10,310, Longford Town is the largest town in the county followed by Ballymahon (2,661), Edgeworthstown (2,339), Lanesborough (1,442) and Granard (1,371). The county is one half of the Dáil Éireann constituency of Longford–Westmeath. 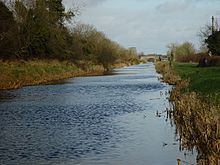 The territory now comprising County Longford was traditionally known as Annaly (Anghaile in Irish), Tethbae or Teffia (Teabhtha in Irish) and formed the territory of the Farrell clan. After the Norman invasion of the 12th century, Annaly was granted to Hugh de Lacy as part of the Liberty of Meath. An English settlement was established at Granard, with Norman Cistercian monasteries being established at Abbeylara and Abbeyshrule, and Augustinian monasteries being established at Abbeyderg and at Saints' Island on the shore of Lough Ree. Monastic remains at Ardagh, Abbeylara, Abbeyderg, Abbeyshrule, Inchcleraun Island in Lough Ree, and Inchmore Island in Lough Gowna are reminders of the county's long Christian history.

However, by the 14th century, English influence in Ireland was on the wane. The town of Granard was sacked by Edward Bruce's army in 1315, and the O'Farrells soon recovered complete control over their former territory.

The county was officially shired in 1586 in the reign of Elizabeth I from the northern portion of Westmeath, but English control was not fully established until the aftermath of the Nine Years' War. County Longford was added to Leinster by James I in 1608 (it had previously been considered part of Connacht), with the county being divided into six baronies and its boundaries being officially defined. The county was planted by English and Scottish landowners in 1620, with much of the O'Farrell lands being confiscated and granted to new owners. The change in control was completed during the Cromwellian plantations of the 1650s.

The county was a centre of the 1798 rebellion, when the French expeditionary force led by Humbert which had landed at Killala were defeated outside the village of Ballinamuck on 8 September by a British army led by Cornwallis. Considerable reprisals were inflicted by the British on the civilian inhabitants of the county in the aftermath of the battle.

A revolutionary spirit was again woken in the county during the Irish War of Independence when the North Longford flying column, led by Seán Mac Eoin, became one of the most active units on the Irish side during that war.

Agriculture is an important facet in the way of life and for the economy in County Longford. There are 73,764 hectares of area (67.6% of the county's total area) farmed in the county. There are approximately 126,904 cattle in the county too.

All content from Kiddle encyclopedia articles (including the article images and facts) can be freely used under Attribution-ShareAlike license, unless stated otherwise. Cite this article:
County Longford Facts for Kids. Kiddle Encyclopedia.