Kids Encyclopedia Facts
This page is about the county in Ireland. For other uses, see Leitrim.

County Leitrim (pronounced LEE-trəm, Irish: Contae Liatroma) is a county in Ireland. It is in the province of Connacht and is part of the Border Region. It is named after the village of Leitrim. Founded in the early modern period, the county encompasses the historic Gaelic Ireland territory of West Bréifne corresponding to the northern part of the county, and Muintir Eolais or Conmaicne Réin, corresponding to the southern part. Leitrim County Council is the local authority for the county, which had a population of 31,972 according to the 2016 census.

Leitrim is the 26th largest of the 32 counties by area and the smallest by population on the island. It is the smallest of Connacht’s 5 counties in both size and population. Leitrim is bordered by the counties of Donegal to the north, Fermanagh to the north-east, Cavan to the east, Longford to the south, Roscommon to the south-west and Sligo to the west. Fermanagh is in Northern Ireland while all the other neighbouring counties are within the Republic.

There are five historic baronies in the county. While baronies continue to be officially defined units, they are no longer used for many administrative purposes. Their official status is illustrated by Placenames Orders made since 2003, where official Irish names of baronies are listed under "Administrative units". They are Carrigallen, Drumahaire, Leitrim, Mohill and Rosclogher.

Towns and villages in north Leitrim 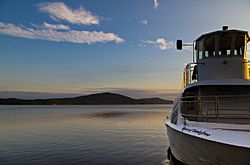 A tour boat on Lough Gill. One of the many lakes in County Leitrim. 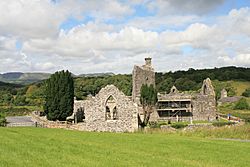 The ruins of Creevelea Friary, near Dromahair. 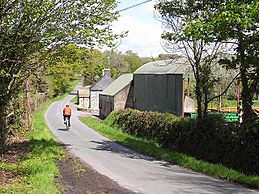 A typical country lane near Carrigallen.

Towns and villages in south Leitrim 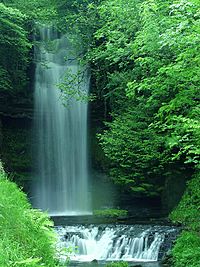 Leitrim has a hilly and mountainous landscape in its north-west and is relatively flat in the south-east, each separated from the other by Lough Allen in the middle of the county. Leitrim has the shortest length of coastline of any Irish county that touches the sea. At Tullaghan, the coastline is only 2.5 kilometres (1.6 mi) long. The Shannon is linked to the Erne via the Shannon-Erne Waterway. Notable lakes include: 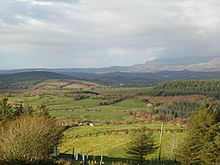 In ancient times Leitrim formed the western half of the Kingdom of Breifne. This region was long influenced by the O'Rourke family of Dromahair, whose heraldic lion occupies the official county shield to this day. Close ties initially existed with the O'Reilly clan in the eastern half of the kingdom, however a split occurred in the 13th century and the kingdom was divided into East Breifne, now County Cavan, and West Breifne, now County Leitrim. The Normans invaded in the 13th century and occupied the south of Breifne. Much of the county was confiscated from its owners in 1620 and given to Villiers and Hamilton. Their initial objective was to plant the county with English settlers. However, this proved unsuccessful. English Deputy Sir John Perrot had ordered the legal establishment of "Leitrim County" a half-century prior, in 1565. Perrott also demarcated the current county borders around 1583.

Long ago Ireland was covered in Woodland, and five great forests are traditionally said to have stood in Leitrim, with a 19th century county survey stating- “a hundred years ago almost the whole country was one continued, undivided forest, so that from Drumshanbo to Drumkeeran, a distance of nine or ten miles, one could travel the whole way from tree to tree by branches". Many of these great forests were denuded for the making for Charcoal for Iron works around Slieve Anierin. Writing in 1791, the geographer Beaufort suggested the county housing population encompassed 10,026 homes with "upwards of 50,000 inhabitants", the primary agriculture being cattle production, and the growth of flax sustaining the linen industry.

Leitrim was first hit by the recession caused by the mechanisation of linen weaving in the 1830s and its 155,000 residents (as of the 1841 census) were ravaged by the Great Famine and the population dropped to 112,000 by 1851. The population subsequently continued to decrease due to emigration. After many years, the wounds of such rapid population decline have finally started to heal. Agriculture improved over the last century. Leitrim now has the fastest growing population in Connacht.

Working of the county's rich deposits of iron ore began in the 15th century and continued until the mid 18th century. Coal mining became prominent in the 19th century to the east of Lough Allen at Slieve Anierin and also to the west in Arigna, on the Roscommon border. The last coal mine closed in July 1990 and there is now a visitor centre. Sandstone was also quarried in the Glenfarne region. William Butler Yeats spent the turn of the twentieth century fascinated with Lough Allen and much of Leitrim. Glencar Waterfall, 11 kilometres (7 mi) from Manorhamilton, inspired Yeats and is mentioned in his poem The Stolen Child. 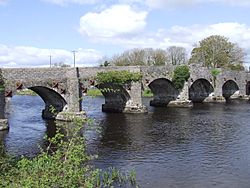 The Stone bridge at Drumsna that connects counties Leitrim and Roscommon. 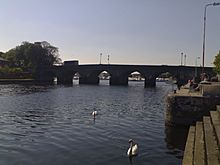 All content from Kiddle encyclopedia articles (including the article images and facts) can be freely used under Attribution-ShareAlike license, unless stated otherwise. Cite this article:
County Leitrim Facts for Kids. Kiddle Encyclopedia.