Lough Gill is about 8 km or 5 miles long and 2 km or 1 mile wide. The Lough Gill system consists of the river Bonet that flows into the eastern end of the lake and the River Garavogue which drains the lake to the west near Sligo Town.

The picturesque lake is surrounded by woodlands, such as Slish Wood, Dooney Rock, and Hazelwood all of which contain popular nature trails and viewing points along the lake. The wooded hills of Slieve Killery and Slieve Daean dominate the south shore.

It is a popular location for birdwatchers.

Lough Gill has a unique microclimate and is noted for its high number of rare or scarce animal and plant species. It is part of the Lough Gill SAC (Special Area of Conservation) for habitats listed on Annex I and II of the E.U. Habitats Directive, including two with priority status: alluvial forest, orchid-rich calcareous grassland.

The vegetation of the area was dominated by mixed woodland from 4,600 BC to at least 1400 AD. Scots pine was dominant until 3,400 BC. In a scientific study, Arbutus unedo pollen was found at Slish Lake dating from as early as 100 AD, and so it is considered native to this area.

The woods surrounding the lake are dominated by oak (Quercus spp.), rowan (Sorbus aucuparia) and willows (Salix spp.). The shores of the lake are home to the world's northernmost specimens of the rare Mediterranean strawberry tree (Arbutus unedo). It is a small evergreen tree of the family Ericaceae, which in Ireland can grow to be a forest tree, reaching heights of up to 15 metres. Its Irish name is caithne.

A small colony of common terns breed on the lake's islands (20 pairs in 1993). Kingfishers are also found on the lake.

The lake contains about 20 small islands, including the Isle of Innisfree, made famous by William Butler Yeats's poem "The Lake Isle of Innisfree". Other islands include Church Island, and Beezie's Island, which was inhabited until 1951. 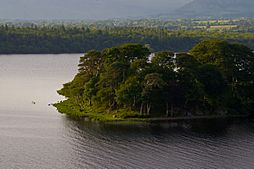 In the early historic era (5th-8th centuries), the area was home to a branch of the Cálraighe. Parke's Castle, a plantation fortified house on the northern shore, was built in the early 17th century by Captain Robert Parke on the site of a former tower house of the Uí Ruairc clann. The Uí Ruairc clan ruled the area from about the 7th century up to the time of Oliver Cromwell.

In 1196 - Congalach, the son of Farrell O'Rourke, was slain by the men of Lúighne, on Slieve-da-én (Mountain of the Two Birds).

1346 - A war broke out between O'Rourke, i.e. Ualgarg, and Rory, the son of Cathal O'Conor; and an engagement took place between them in Calry-Lough-Gill, in which O'Rourke was routed, and all his gallowglasses slain, i.e. Mac Buirrce, and Mac Neill Cam with their people. O'Rourke was afterwards pursued by Rory O'Conor and the Clann-Donough, and was killed by Mulrony Mac Donough. This was a lamentable deed.

The lake became part of the Hazelwood estate in the 17th century. 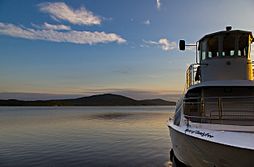 The lake is home to the Lough Gill 10 km Swim for the North West Hospice in Sligo. This annual fundraiser began in 2011 raising over €34,000 to date for the hospice also winning the coveted Irish Long Distance Swimming Association swim of the year in both 2011 and 2012. It is run by a committee made up of local swimmers and friends of the family of Neill McGarry, for whom the event trophy is dedicated. 57 swimmers completed the 2012 swim.

The first man to successfully swim the English Channel, Captain Matthew Webb, used the lake as part of his training for the feat. He was a friend of W.B. Yeats's grandfather, who lived in the area.

All content from Kiddle encyclopedia articles (including the article images and facts) can be freely used under Attribution-ShareAlike license, unless stated otherwise. Cite this article:
Lough Gill Facts for Kids. Kiddle Encyclopedia.