The Lake Isle of Innisfree facts for kids

I will arise and go now, and go to Innisfree,
And a small cabin build there, of clay and wattles made;
Nine bean rows will I have there, a hive for the honey bee,
And live alone in the bee-loud glade.

And I shall have some peace there, for peace comes dropping slow,
Dropping from the veils of the morning to where the cricket sings;
There midnight's all a glimmer, and noon a purple glow,
And evening full of the linnet's wings.

I will arise and go now, for always night and day
I hear lake water lapping with low sounds by the shore;
While I stand on the roadway, or on the pavements grey,
I hear it in the deep heart's core.

"The Lake Isle of Innisfree" is a twelve-line poem comprising three quatrains, written by William Butler Yeats in 1888 and first published in the National Observer in 1890. It was reprinted in The Countess Kathleen and Various Legends and Lyrics in 1892 and as an illustrated Cuala Press Broadside in 1932.

"The Lake Isle of Innisfree" exemplifies the style of the Celtic Revival: it is an attempt to create a form of poetry that was Irish in origin rather than one that adhered to the standards set by English poets and critics. It received critical acclaim in the United Kingdom and France. The poem is featured in Irish passports. 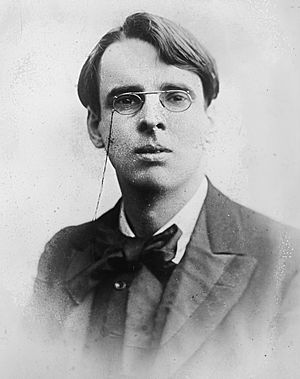 Innisfree is an uninhabited island within Lough Gill, in Ireland, near which Yeats spent his summers as a child. Yeats describes the inspiration for the poem coming from a "sudden" memory of his childhood while walking down Fleet Street in London in 1888. He writes, "I had still the ambition, formed in Sligo in my teens, of living in imitation of Thoreau on Innisfree, a little island in Lough Gill, and when walking through Fleet Street very homesick I heard a little tinkle of water and saw a fountain in a shop-window which balanced a little ball upon its jet, and began to remember lake water. From the sudden remembrance came my poem "Innisfree," my first lyric with anything in its rhythm of my own music. I had begun to loosen rhythm as an escape from rhetoric and from that emotion of the crowd that rhetoric brings, but I only understood vaguely and occasionally that I must for my special purpose use nothing but the common syntax. A couple of years later I could not have written that first line with its conventional archaism -- "Arise and go"—nor the inversion of the last stanza."

All content from Kiddle encyclopedia articles (including the article images and facts) can be freely used under Attribution-ShareAlike license, unless stated otherwise. Cite this article:
The Lake Isle of Innisfree Facts for Kids. Kiddle Encyclopedia.