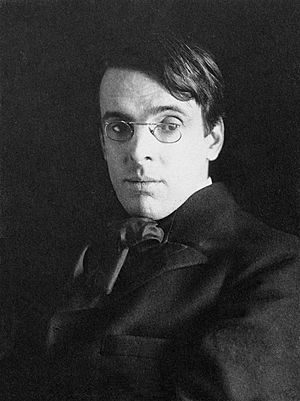 Yeats' early poetry drew heavily on myth and legend. His later work had more to do with contemporary issues. One of his famous poems is called "Leda and the Swan".

With Lady Gregory and others, he was one of the people who founded the Irish Literary Theatre and the Abbey Theatre.

He was also interested in Hermeticism and Theosophy. He was a member of the Hermetic Order of the Golden Dawn.

Yeats won the Nobel Prize in literature in 1923. He died in Menton, France.

All content from Kiddle encyclopedia articles (including the article images and facts) can be freely used under Attribution-ShareAlike license, unless stated otherwise. Cite this article:
William Butler Yeats Facts for Kids. Kiddle Encyclopedia.