Menton is a commune in the department of Alpes-Maritimes.

The Menton area has been inhabited since the paleolithic era, and is the site of the original "Grimaldi Man" find of early modern humans, as well as remains of Neanderthals and Cro-Magnons. In Roman times, the Via Julia Augusta, a road connecting Placentia (now Piacenza) with Arelates (now Arles) passed through Menton, running along the Rue Longue in the old town. The first major settlement occurred during the 11th century CE, when the Count of Ventimiglia constructed the Château de Puypin (Podium Pinum) on the Pépin hill, north and west of the modern town centre. During the 13th century, the seigneury of Puypin fell to the Vento family of Genoa who built a new castle along the Roman road, now the site of the Vieux-Château cemetery, providing the core around which the current town grew. Menton was thus incorporated into the Republic of Genoa. The first mention of Menton dates from 21 July 1262, in the peace treaty between Charles of Anjou and Genoa. Its position on the border between the Angevin-ruled Provence and the Republic of Genoa, which at the time claimed Monaco as its western limit, made it a coveted location.

Menton, as part of Monaco, was the extreme western area of the Republic of Genoa (green color) in 1664.

Acquired in 1346 by Charles Grimaldi, Lord of Monaco, Menton was ruled by the Princes of Monaco until the French Revolution. Annexed during the Revolution, Menton remained part of France through the First Empire. It belonged to the district of Sanremo in the department of Alpes-Maritimes, which at the time included Monaco and Sanremo.

In 1814, Menton was included in a reconstituted principality of Monaco which, after Napoleon's Hundred Days in 1815, became a protectorate of the King of Sardinia. The Princes of Monaco were obliged to do homage to the King for Menton, although not for Monaco itself.

Map of the territory of the free cities of Menton and Roquebrune in 1848.

In 1848, Menton, along with its neighbour Roquebrune, seceded from Monaco, due at least in part to a tax imposed on lemon exports. They proclaimed themselves a "free city" during the 1848 revolutions related to the Italian Risorgimento, then two years later placed themselves under the protection of the Kingdom of Sardinia where they were administered by the House of Savoy for ten years.

The Treaty of Turin concluded on 24 March 1860 between the Kingdom of Sardinia and Napoleon III's France called for the annexation of the County of Nice to France, subject to a plebiscite, as a reward for French assistance in Italy's war against Austria. The plebiscite, with universal adult male suffrage, was held on April 15 and 16, 1860, and resulted in an overwhelming vote in favour of annexation (833 for versus 54 against in Menton and Roquebrune), despite complaints of rigged elections from, among others, Nice-born Italian nationalist Giuseppe Garibaldi. The county of Nice was thus annexed to France that June, and Napoleon III paid 4 million francs in compensation to the prince of Monaco, who renounced his rights in perpetuity on 2 February 1861.

The publication of Winter and Spring on the Shores of the Mediterranean (1861) by the English doctor James Henry Bennett had a profound effect on Menton, making it a popular destination for sufferers of tuberculosis. By the end of the 19th century, tourism was an important factor in Menton's growth. The town was popular with English and Russian aristocrats who built many of the luxurious hotels, villas, and palaces which still grace Menton today. Many of these hotels and palaces were pressed into service as hospitals during World War I to allow injured troops to recuperate in a pleasant climate. 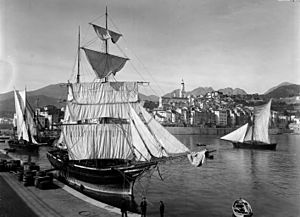 Menton was the only sizable settlement captured by Italy during its invasion of France in June 1940. Following the armistice of June 22, 1940, two-thirds of the territory of the commune was annexed by Italy as terra irredenta. The annexation lasted until 8 September 1943.

Although officially returned to Vichy France, Menton was in fact occupied by Nazi Germany until its liberation by American and Canadian troops of the First Special Service Force on 8 September 1944.

The port and the old part of town 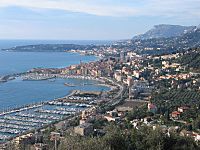 View of the port of Menton

Menton, nicknamed the Pearl of France, is located on the Mediterranean Sea at the Franco-Italian border, just across from the Ligurian town of Ventimiglia.

The fishing industry was devastated in the 1980s and 1990s due to a combination of overfishing and hypoxia in the bay. At the time, the devastation was erroneously attributed to the dubiously nicknamed "killer algae" Caulerpa taxifolia (a non-native Asian tropical green alga first discovered in the Mediterranean Sea adjacent to the Oceanographic Museum of Monaco in 1984) spread throughout the coastal sea floor. Later, sound scientific findings revealed that the seaweed was adept at absorbing pollutants and excess nutrients, actually aiding the recovery of native Posidonia sea grass and enhancing local fish populations and overall biodiversity.

Menton has a hot-summer Mediterranean climate (Csa, according to the Köppen climate classification). However, the milder winters (on average) and the warmer nights in summer (on average), compared to the rest of the French Mediterranean coastal area, provide Menton with a particular micro-climate (experienced from Nice through Monaco and Menton, toward the Italian border) that is favorable to tangerine, orange and lemon groves, hence one of the town's symbols, the lemon. Winter frosts are extremely rare but may occasionally occur every few years. Likewise, summer temperatures are relatively moderate, rarely rising above 30°C.

Menton from the sea 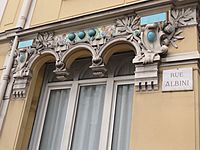 Menton is famous for its gardens, including the Jardin Serre de la Madone, the Jardin botanique exotique de Menton ('Le Val Rahmeh'), the Fontana Rosa, the Maria Serena garden, and the modernist gardens of Les Colombières. Le Val Rahmeh was established in 1905 by Englishman Sir Percy Radcliffe, the first owner of the gardens, and named for his wife. Villa Fontana Rosa was built in 1922 by Blasco Ibáñez, a Spanish novelist, and the gardens of the villa are now open to the public.

The Mentonasc dialect is currently spoken by about 10% of the population in Menton, Roquebrune, and the surrounding villages. It is taught within the French educational system, as a variety of Niçard (i.e. Provençal and Occitan). However, in nineteenth-century linguistic descriptions, as well as in contemporary linguistic scholarship, Mentonasc is described as an intermediate between Niçard and the Intemelio dialect of Ligurian. Some scholars insist that Mentonasc is, at its base, a Ligurian dialect, with French influences coming only later, and that its supposed misclassification as a variety of Provençal has essentially political motives.

Although the name's spelling and pronunciation in French are identical to those for the word that means "chin", there does not seem to be any link with this French word. According to the French geographer Ernest Nègre, the name Menton comes from the Roman name Mento. However, it is possible that the name of the city comes from Mons Ottonis (reconstituted) from the name of Otton II, the Count of Ventimiglia from 1162-1200. In Mentonasc, the city's name is Mentan, and in Italian Mentone.

An inhabitant of Menton, un mentonnais or un mentonasque in French, would be O mentonasc in the local dialect.

The Lemon Festival takes place every February. The festival follows a given theme each year; past themes include Viva España, Disney, Neverland, and India. The festival lasts a few days, with different bands passing through Menton's streets on foot or on truck trailers. The Casino Gardens in the centre of town are decorated in the theme of the festival, using lemons to cover the exhibits, and huge temporary statues are built and covered with citrus fruit.

The Casino Gardens are also the location for Menton's Christmas Festival.

The Menton Classical Musical Festival is also held every year in the centre of the old town.

All content from Kiddle encyclopedia articles (including the article images and facts) can be freely used under Attribution-ShareAlike license, unless stated otherwise. Cite this article:
Menton Facts for Kids. Kiddle Encyclopedia.