Alpes-Maritimes (Occitan: Aups Maritims; Italian: Alpi Marittime) is a department of the Provence-Alpes-Côte d'Azur region in the extreme southeast corner of France.

The name Alpes-Maritime comes from Alpes Maritimae, a Roman military district created in the region by Augustus in 14 BC. 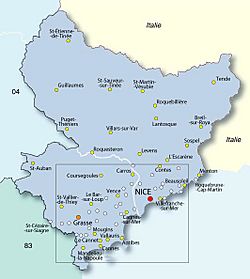 The department of the Alpes-Martimes was created on 4 February 1793 with the territory of the County of Nice that was annexed in January of the same year. The capital was Nice. It was divided in three districts: Menton, Nice and Puget-Théniers. In 1794, district of Menton was changed to district of Fort-d'Hercule (Monaco).

After the annexation of San Remo, the arrondissement of San Remo was created in 1805. By the Peace of Paris in 1814, San Remo passed to Genoa and the rest of the department passed to the Kingdom of Sardinia.

On 10 September 1926, the arrondissement of Puget-Théniers was eliminated.

The department is surrounded by the Piedmont and Liguria regions (Italy) and two departments; the Mediterranean Sea is to the south. It surrounds the Principality of Monaco on the west, north, and east.

The Köppen climate classification type for the climate at Nice is a "Mediterranean climate" and of the subtype "Csb".

There are 2 arrondissements (districts), 27 cantons and 163 communes (municipalities) in Alpes-Maritimes.

The following is a list of the 27 cantons of the Alpes-Maritimes department, in France, following the French canton reorganisation which came into effect in March 2015:

The inhabitants of Alpes-Maritimes are known, in French, as Maralpins (women: Maralpines).

Evolution of the population in Alpes-Maritimes

The communes in the department with more than 20,000 inhabitants are:

All content from Kiddle encyclopedia articles (including the article images and facts) can be freely used under Attribution-ShareAlike license, unless stated otherwise. Cite this article:
Alpes-Maritimes Facts for Kids. Kiddle Encyclopedia.