Cocteau wrote or worked on 21 stage performances, some of which were ballets, and some were plays. Cocteau's movies, most of which he both wrote and directed, were particularly important in introducing the avant-garde into French cinema and influenced the upcoming French New Wave genre.

He also worked with Pablo Picasso on several projects and was friends with most of the European art community. In all his creative work, he was a modernist. 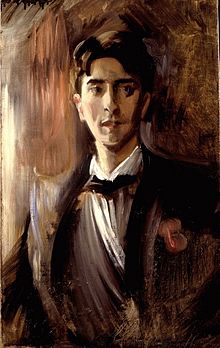 In the 1930s, Cocteau had an affair with Princess Natalie Paley, the beautiful daughter of a Romanov grand duke. She became pregnant. To Cocteau's distress and Paley's life-long regret, the foetus was aborted. Cocteau's longest-lasting relationships were with the French actors Jean Marais (who played 'tough guy' roles in movies and TV), and Édouard Dermit, whom Cocteau formally adopted. Cocteau cast Marais in four of his movies.

Cocteau died of a heart attack in Milly-la-Foret, Essonne.

Cocteau wrote or worked on 21 stage performances, some of which were ballets, and some were plays.

He was involved in Diaghilev's Ballets Russes from the first season in Paris, 1909. He wrote scenarios (librettos) for Fokine's Le Dieu Blue in 1912, Massine's Parade in 1917 and Nijinska's Le Train Bleu in 1924. He also design company posters, and worked for several other ballet companies. He wrote many articles on dance, and made sketches of many in Diaghilev's circle.

Cocteau directed eleven movies in avant-gard style, wrote scripts for six movies and dialogue for three, and directed the photography for one more. Some of his most well-known were Blood of a Poet (1930), Les Parents terribles (1948), and Orpheus (1949).

Cocteau wrote extensively. including poetry. All of it is in French, but some is available in translation.

Cocteau wrote five novels. The most important of these was probably Les Enfants terribles (1929). He also published 23 books or pamphlets of original poetry, and 26 volumes of poetic criticism and collections. He illustrated 12 works of poetry. He made a number of recordings, mostly spoken poems.

All content from Kiddle encyclopedia articles (including the article images and facts) can be freely used under Attribution-ShareAlike license, unless stated otherwise. Cite this article:
Jean Cocteau Facts for Kids. Kiddle Encyclopedia.