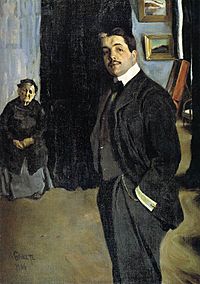 The Ballets Russes were a company of ballet dancers whose full title was Les Ballets Russes de Serge Diaghilev. They became extremely famous in Europe in the early part of the 20th century.

The group was formed and directed by the Russian Sergei Diaghilev. The Ballets Russes had more influence on ballet and ballet music than any other ballet company of their time. The dancers were from Russia, but the group travelled throughout Europe, spending a lot of their time based in Paris. Stravinsky was one of the many composers who wrote ballet music for them.

Sergei Diaghilev was an impresario who was extremely good at spotting good dancers and helping them to rise to great standards. He had very good taste in art and music and inspired some great composers to write music for his dancers. He got some of the most famous painters of his time to make set designs for his productions.

History of the ballet group

During the World War I they were cut off from any contact with Russia. During these years they experimented with many new ideas. Productions such as Les Biches and Le Train Bleu were about the fashionable society around them. At the same time the company also had productions which reflected Russian folklore, Greek legends and the Orient.

Their fame continued after the war.

The company worked with several very famous choreographers such as Marius Petipa, Michel Fokine, Vaslav Nijinsky, Leonide Massine, and the young George Balanchine. Nijinsky’s dances reflect the art movement called Expressionism. Many of his new ideas could be seen in L'Apres-midi d'un Faune and The Rite of Spring. 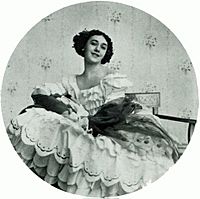 The Ballets Russes had many famous dancers. Many of them were from the Russian Imperial Theatres and they came to dance for Ballets Russes during the summer months. Some of the great dancers include Anna Pavlova, Tamara Karsavina, Olga Spessivtzeva, Mathilde Kschessinska, Ida Rubinstein, Bronislava Nijinska, Lydia Lopokova and Alicia Markova.

The company was particularly influential because they treated male dancers as important. Up until this time the female dancers had much more attention than the male dancers. Among the male dancers were Michel Fokine, Serge Lifar, Léonide Massine, George Balanchine, Adolphe Bolm, and, especially, Vaslav Nijinsky who became the greatest dancer of his time.

The most famous music composed for Ballets Russes was that by the composer Igor Stravinsky. His ballets include The Firebird, Petrouchka, The Rite of Spring, Les Noces and Apollon musagète. The first time that The Rite of Spring was performed many in the audience hated it and booed and started to fight. Others thought it was brilliant. Stravinsky's music was original and shocking, and Nijinsky's choreography went beyond classical ballet technique. The audience found it difficult to understand the music and dance. They were used to the romantic music and classical ballet of the nineteenth century.

Diaghilev also used music which had already been composed. This included music by Debussy, Ravel, Darius Milhaud, Prokofiev and other famous composers of the time.

The artists and designers who worked for the ballet included some of the 20th century's most famous names. Picasso, Bakst, Braque, Matisse, Coco Chanel, Miró, Dali, and Utrillo were some of the best-known.

All content from Kiddle encyclopedia articles (including the article images and facts) can be freely used under Attribution-ShareAlike license, unless stated otherwise. Cite this article:
Ballets Russes Facts for Kids. Kiddle Encyclopedia.