Kids Encyclopedia Facts
Not to be confused with Auguste Maquet.

August Robert Ludwig Macke (3 January 1887 – 26 September 1914) was a German Expressionist painter. He was one of the leading members of the German Expressionist group Der Blaue Reiter (The Blue Rider). He lived during a particularly innovative time for German art: he saw the development of the main German Expressionist movements as well as the arrival of the successive avant-garde movements which were forming in the rest of Europe. Like a true artist of his time, Macke knew how to integrate into his painting the elements of the avant-garde which most interested him. Like Otto Soltau, he was one of many young German artists who died in the First World War. 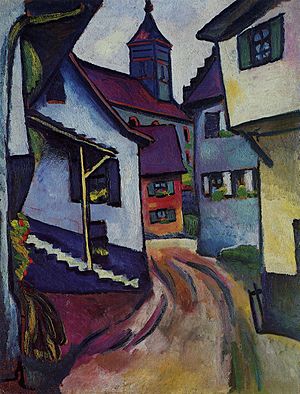 Street with church in Kandern, 1911

August Robert Ludwig Macke was born in Germany on 3 January 1887, in Meschede, Westphalia. He was the only son of August Friedrich Hermann Macke (1845–1904), a building contractor and amateur artist, and his wife, Maria Florentine, née Adolph, (1848–1922), who came from a farming family in Westphalia's Sauerland region. Shortly after August's birth the family settled at Cologne, where Macke was educated at the Kreuzgymnasium (1897-1900) and became a friend of Hans Thuar, who would also become an artist. In 1900, when he was thirteen, the family moved to Bonn, where Macke studied at the Realgymnasium and became a friend of Walter Gerhardt and Gerhardt's sister, Elisabeth, whom he would marry a few years later.

The first artistic works to make an impression on the boy were his father's drawings, the Japanese prints collected by his friend Thuar's father and the works of Arnold Böcklin which he saw on a visit to Basel in 1900. In 1904 Macke's father died, and in that year Macke enrolled at the Kunstakademie Düsseldorf, under Adolf Maennchen (1904-1906). During this period he also took evening classes under Fritz Helmut Ehmke (1905), did some work as a stage and costume designer at the Schauspielhaus Düsseldorf, and visited northern Italy (1905) and Netherlands, Belgium and Britain (1906). 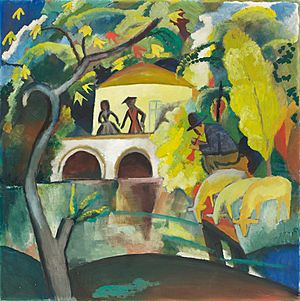 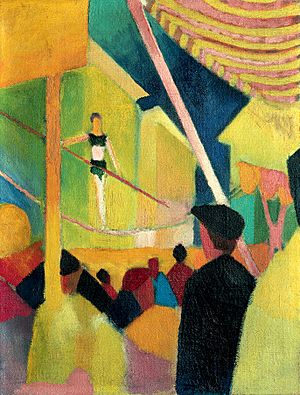 Thereafter Macke lived most of his creative life in Bonn, with the exception of a few periods spent at Lake Thun in Switzerland and various trips to Paris, Italy, the Netherlands and Tunisia. In Paris, where he traveled for the first time in 1907, Macke saw the work of the Impressionists, and shortly after he went to Berlin and spent a few months in Lovis Corinth's studio. His style was formed within the mode of French Impressionism and Post-impressionism and later went through a Fauve period. In 1909 he married Elisabeth Gerhardt. In 1910, through his friendship with Franz Marc, Macke met Kandinsky and for a while shared the non-objective aesthetic and the mystical and symbolic interests of Der Blaue Reiter.

Macke's meeting with Robert Delaunay in Paris in 1912 was to be a sort of revelation for him. Delaunay's chromatic Cubism, which Apollinaire had called Orphism, influenced Macke's art from that point onwards. His Shops Windows can be considered a personal interpretation of Delaunay's Windows, combined with the simultaneity of images found in Italian Futurism.

The exotic atmosphere of Tunisia, where Macke traveled in April 1914 with Paul Klee and Louis Moilliet was fundamental for the creation of the luminist approach of his final period, during which he produced a series of works now considered masterpieces. August Macke's oeuvre can be considered as Expressionism (in its original German flourishing between 1905 and 1925), and also as part of Fauvism. The paintings concentrate primarily on expressing feelings and moods rather than reproducing objective reality, usually distorting colour and form.

Macke's career was cut short by his early death in the second month of the First World War at the front in Champagne, France, on 26 September 1914. His final painting, Farewell, depicts the mood of gloom that settled after the outbreak of war. This was also the same year that he painted the famous painting Türkisches Café in München (1914).

The August Macke Prize, was given the first time in 1959 by the districts Arnsberg, Brilon, Olpe and Meschede, town of birth of August Macke in Germany.

The August-Macke-Haus is a museum dedicated to August Macke founded in 1991. It is located in Macke's former home in Bonn, where he lived from 1911 to 1914.

All content from Kiddle encyclopedia articles (including the article images and facts) can be freely used under Attribution-ShareAlike license, unless stated otherwise. Cite this article:
August Macke Facts for Kids. Kiddle Encyclopedia.