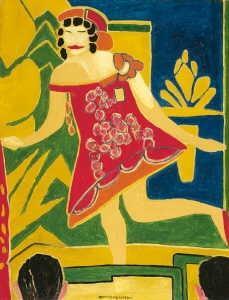 Les Fauves (French for The Wild Beasts) was the name of a modern art movement in the early 20th century, led by the painters Henri Matisse and André Derain. The Fauves were a group of French painters who were influenced by the bright colours used by the Post-Impressionists Vincent van Gogh and Paul Gauguin.

The bright colourful style of painting that they used began around 1900 and continued beyond 1910, but the group was only together for three years, 1905–1907. In that time they had three exhibitions together. Their influence has continued until the present day, and was adopted or influenced many artists who are not usually thought of as fauvists. Aristarkh Lentulov is one good example.

All content from Kiddle encyclopedia articles (including the article images and facts) can be freely used under Attribution-ShareAlike license, unless stated otherwise. Cite this article:
Fauvism Facts for Kids. Kiddle Encyclopedia.