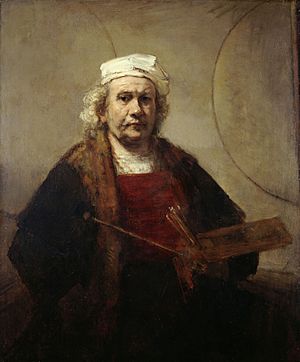 Rembrandt's Self-Portrait with Two Circles (c. 1665–1669). Rembrandt was possibly the first artist in history to fully transform self-portraiture into a sophisticatedly developed genre, in its own right.

A Self portrait is a picture of the artist drawing it. The earliest example of a self-portrait made was Jan van Eyck in 1433. The most famous self portrait painter was Vincent van Gogh. He painted a picture of himself 37 times from 1886 to 1889.

All content from Kiddle encyclopedia articles (including the article images and facts) can be freely used under Attribution-ShareAlike license, unless stated otherwise. Cite this article:
Self-portrait Facts for Kids. Kiddle Encyclopedia.