James Abbott McNeill Whistler (July 10, 1834 – July 17, 1903) was an American artist, active during the American Gilded Age and based primarily in the United Kingdom. His most famous painting is Arrangement in Grey and Black No. 1 (1871), commonly known as Whistler's Mother. Whistler influenced the art world and the broader culture of his time with his artistic theories and his friendships with leading artists and writers.

James Abbott Whistler was born in Lowell, Massachusetts, James lived the first three years of his life in a modest house at 243 Worthen Street in Lowell. Today, the house is a museum dedicated to Whistler. Young Whistler was a moody child who—after bouts of ill-health—often drifted into periods of laziness. His parents discovered in his early youth that drawing often settled him down and helped focus his attention. 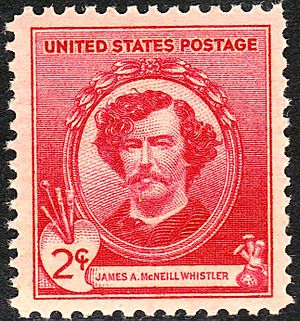 Whistler was sent to Christ Church Hall School with his hopes that he would become a minister. Whistler was rarely without his sketchbook and was popular with his classmates for his caricatures. However, it became clear that a career in religion did not suit him, so he applied to the United States Military Academy at West Point. He was admitted to the highly selective institution in July 1851 on the strength of his family name, despite his extreme nearsightedness and poor health history.

During his three years there, his grades were barely satisfactory, and he was a sorry sight at drill and dress, known as "Curly" for his hair length which exceeded regulations. Colonel Robert E Lee was the West Point Superintendent and, after considerable indulgence toward Whistler, he had no choice but to dismiss the young cadet. Whistler's major accomplishment at West Point was learning drawing and map making from American artist Robert W. Weir.

After West Point, Whistler worked as draftsman mapping the entire U.S. coast for military and maritime purposes. He found the work boring. After it was discovered that he was drawing sea serpents, mermaids, and whales on the margins of the maps, he was transferred to the etching division of the U.S. Coast Survey. He lasted there only two months, but he learned the etching technique which later proved valuable to his career. 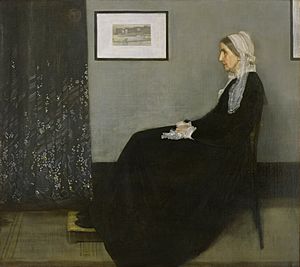 In 1871, Whistler produced his most famous painting, the nearly monochromatic full-length figure entitled Arrangement in Grey and Black No.1, but usually (and incorrectly) referred to as Whistler's Mother. A model failed to appear one day, according to his mother, so Whistler turned to his mother and suggested that he do her portrait.

In his typically slow and experimental way, at first he had her stand, but that proved too tiring so the famous seated pose was adopted. It took dozens of sittings to complete. The deceptively simple design is in fact a balancing act of differing shapes, particularly the rectangles of curtain, picture on the wall, and floor which stabilize the curve of her face, dress, and chair.

The painting narrowly escaped being burnt in a fire aboard a train during shipping. Later the painting was purchased by the French government, the first Whistler work in a public collection, and is now housed in the Musée d'Orsay in Paris.

During the Depression, the picture was billed as a "million dollar" painting and was a big hit at the Chicago World's Fair. It was accepted as a universal icon of motherhood by the worldwide public. In public recognition of its status and popularity, the United States issued a postage stamp in 1934 featuring an adaptation of the painting.

In 2015, the New Yorker critic Peter Schjeldahl wrote that the painting "remains the most important American work residing outside the United States."

All content from Kiddle encyclopedia articles (including the article images and facts) can be freely used under Attribution-ShareAlike license, unless stated otherwise. Cite this article:
James Whistler Facts for Kids. Kiddle Encyclopedia.