The Cincinnati Art Museum is an art museum in the Eden Park neighborhood of Cincinnati, Ohio. Founded in 1881, it was the first purpose-built art museum west of the Alleghenies, and is one of the oldest in the United States. Its collection of over 67,000 works spanning 6,000 years of human history make it one of the most comprehensive collections in the Midwest.

Museum founders debated locating the museum in either Burnet Woods, Eden Park, or downtown Cincinnati on Washington Park. Charles West, the major donor of the early museum, cast his votes in favor of Eden Park sealing its final location. The Romanesque-revival building designed by Cincinnati architect James W. McLaughlin opened in 1886. A series of additions and renovations have considerably altered the building over its 136-year history.

In 2003, a major addition, The Cincinnati Wing was added to house a permanent exhibit of art created for Cincinnati or by Cincinnati artists since 1788. The Cincinnati Wing includes fifteen new galleries covering 18,000 square feet (1,700 m2) of well-appointed space, and 400 objects. The Odoardo Fantacchiotti angels are two of the largest pieces in the collection. Fantacchiotti created these angels for the main altar of St. Peter in Chains Cathedral in the late 1840s. They were among the first European sculptures to come to Cincinnati. The Cincinnati Wing also contains the work of Frank Duveneck, Rookwood Pottery, Robert Scott Duncanson, Mitchell & Rammelsberg Furniture, and a tall case clock by Luman Watson.

In the late nineteenth century, public art museums were still very much a new phenomenon, especially as far west as Cincinnati. Following the success of the 1876 Centennial Exhibition held in Philadelphia, the Women's Art Museum Association was organized in Cincinnati with the intent of bringing such an institution to the region for the benefit of all citizens. Enthusiasm for these goals grew steadily and by 1881 the Cincinnati Museum Association was incorporated. The art museum was at first temporarily housed in the south wing of Music Hall in Over-the-Rhine. Just five years later, or on May 17, 1886, the Art Museum building in Eden Park was dedicated with elaborate ceremonies. In November of 1887, the McMicken School relocated to the newly built museum campus and was renamed the Art Academy of Cincinnati. 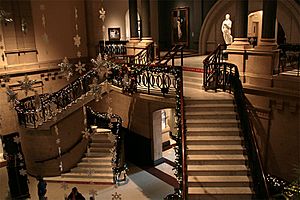 The Cincinnati Art Museum enjoyed the support of the community from the beginning. Generous donations from a number of prominent Cincinnatians, including Melville E. Ingalls, grew the collection to number in the tens of thousands of objects, which soon necessitated the addition of the first of several Art Museum expansions.

In 1907 the Schmidlapp Wing opened, which was followed by a series of building projects. The addition of the Emery (named after Cincinnati philanthropists Thomas J. Emery and his wife Mary Emery), Hanna and French wings in the 1930s enclosed the courtyard and gave the Art Museum its current rectangular shape and provided the space in which the American, European and Asian collections are currently shown.

Renovations during the late 1940s and early 1950s divided the Great Hall into two floors and the present main entrance to the Art Museum was established. The 1965 completion of the Adams-Emery wing increased our facility resources yet further, adding space for the permanent collection, lecture halls and temporary exhibition galleries.

In 1993, a $13 million project restored the grandeur of the Art Museum's interior architecture and uncovered long-hidden architectural details. This project included the renovation of one of the Art Museum's signature spaces, the Great Hall. In addition, new gallery space was created and lighting and climate control were improved. The Art Museum's temporary exhibition space was expanded to approximately 10,000 square feet (930 m2) to accommodate major temporary exhibitions. In 1998, the museum's board decided to separate the museum from the Art Academy of Cincinnati.

By the turn of the twenty-first century, the Art Museum's collection numbered over 60,000 objects and, today, is the largest in the state of Ohio. In 2003, the Cincinnati Art Museum deepened its ties with the Greater Cincinnati community by opening the popular and expansive Cincinnati Wing, the first permanent display of a city's art history in the nation. In addition, on May 17, 2003, the Art Museum eliminated its general admission fee forever, made possible by The Lois and Richard Rosenthal Foundation. In 2005, the Art Academy of Cincinnati officially left the museum's Eden Park campus, relocating to Over-the-Rhine.

As of June 2020, Mount Adams, home of the Cincinnati Art Museum and Cincinnati Playhouse in the Park, was undergoing major renovation, including a new outdoor civic and art space titled "Art Climb". Art Climb includes a staircase from the sidewalk near the intersection of Eden Park Drive and Gilbert Avenue leading to the art museum entrance. Consisting of multiple flights of steps, Art Climb opens up the museum grounds, connects the museum to its neighbors, and provides a space to incorporate outdoor artworks.

Selections from the permanent collection

The Cincinnati Art Museum found it impractical to spend as much as $2.5 million a year on special exhibitions, given its declining endowment when it has unexploited holdings like circus posters and Dutch contemporary design. As a result, in 2010 the museum mounted “See America,” nine small shows that highlighted different parts of the country through the museum’s collection. Attendance at the museum has increased by 30 percent since it started emphasizing its permanent collection.

Admission and hours of operation

General admission is always free to the Cincinnati Art Museum’s 73 permanent collection galleries and the REC family interactive center of the museum, thanks to the Richard and Lois Rosenthal Foundation, the Thomas J. Emery Endowment and an endowment established by the Cincinnati Financial Corporation/The Cincinnati Insurance Companies. Education program fees may apply to adults and children. Special exhibition pricing varies.

All content from Kiddle encyclopedia articles (including the article images and facts) can be freely used under Attribution-ShareAlike license, unless stated otherwise. Cite this article:
Cincinnati Art Museum Facts for Kids. Kiddle Encyclopedia.