Jean-Baptiste-Camille Corot 16 July 1796 – 22 February 1875) was a French landscape and portrait painter as well as a printmaker in etching. 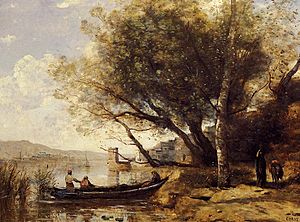 Corot is a pivotal figure in landscape painting. His work simultaneously references the Neo-Classical tradition and anticipates the plein-air innovations of Impressionism (painting outside in front of the scenery). Claude Monet exclaimed in 1897, "There is only one master here—Corot. We are nothing compared to him, nothing." His contributions to figure painting are hardly less important; Degas preferred his figures to his landscapes, and the classical figures of Picasso pay overt homage to Corot's influence.

Though often credited as a precursor of Impressionist practice, Corot approached his landscapes more traditionally than is usually believed. Compared to the Impressionists who came later, Corot's palette is restrained, dominated with browns and blacks ("forbidden colors" among the Impressionists), along with dark and silvery green.

In addition to his landscapes (so popular was the late style that there exist numerous forgeries), Corot produced a number of prized figure pictures. While the subjects were sometimes placed in pastoral settings, these were mostly studio pieces, drawn from the live model.

Corot also executed many etchings and pencil sketches. Some of the sketches used a system of visual symbols—circles representing areas of light and squares representing shadow. He also experimented with the cliché verre process—a hybrid of photography and engraving. Starting in the 1830s, Corot also painted decorative panels and walls in the homes of friends, aided by his students. The works of Corot are housed in museums in France and the Netherlands, Britain, North America and Russia

All content from Kiddle encyclopedia articles (including the article images and facts) can be freely used under Attribution-ShareAlike license, unless stated otherwise. Cite this article:
Jean-Baptiste-Camille Corot Facts for Kids. Kiddle Encyclopedia.