The Phillips Collection facts for kids

The Phillips Collection is an art museum founded by Duncan Phillips and Marjorie Acker Phillips in 1921 as the Phillips Memorial Gallery located in the Dupont Circle neighborhood of Washington, D.C. Phillips was the grandson of James H. Laughlin, a banker and co-founder of the Jones and Laughlin Steel Company. 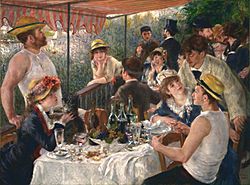 Luncheon of the Boating Party (1881) by Pierre-Auguste Renoir is part of the museum's permanent collection.

Duncan Phillips (1886–1966) played a seminal role in introducing America to modern art. Born in Pittsburgh—the grandson of James H. Laughlin, a banker and co-founder of the Jones and Laughlin Steel Company—Phillips and his family moved to Washington, D.C., in 1895. He, along with his mother, established The Phillips Memorial Gallery after the sudden, untimely deaths of his brother, James Laughlin Phillips (May 30, 1884 – 1918), and of his father, Duncan Clinch Phillips (1838–1917), a Pittsburgh window glass millionaire and member of the South Fork Fishing and Hunting Club, owners of the dam whose failure resulted in the Johnstown Flood.

Beginning with a small family collection of paintings, Phillips, a published art critic, expanded the collection dramatically. A specially built room over the north wing of the family home provided a public gallery space. With the collection exceeding 600 works and facing public demand, the Phillips family moved to a new home in 1930, turning the entire 21st Street residence into an art museum.

Duncan Phillips married painter Marjorie Acker in 1921. With her assistance and advice, Phillips developed his collection "as a museum of modern art and its sources", believing strongly in the continuum of artists influencing their successors through the centuries. His focus on the continuous tradition of art was revolutionary at a time when America was largely critical of modernism, which was seen as a break with the past. Phillips collected works by masters such as El Greco, calling him the "first impassioned expressionist"; Jean-Baptiste-Siméon Chardin because he was "the first modern painter"; Francisco Goya because he was "the stepping stone between the Old Masters and the Great Moderns like Cézanne"; and Édouard Manet, a "significant link in a chain which began with Goya and which [led] to Gauguin and Matisse."

Polly Fritchey, hostess and wife of columnist Clayton Fritchey, helped the Phillips Collection evolve from a small family museum into a public art gallery and was one of the first trustees appointed from outside the family. Moreover, she helped launch its national fundraising campaign. 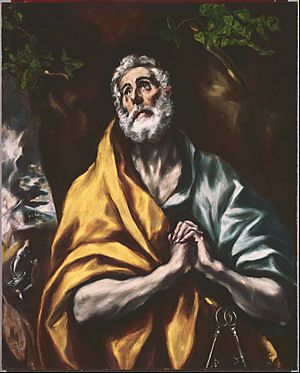 The Phillips Collection, opened in 1921, is America's first museum of modern art. Featuring a permanent collection of nearly 3,000 works by American and European impressionist and modern artists, the Phillips is recognized for both its art and its intimate atmosphere. It is housed in founder Duncan Phillips’ 1897 Georgian Revival home and two similarly scaled additions in Washington, D.C.’s Dupont Circle neighborhood.

From the 1920s to the 1960s, Phillips re-arranged his galleries in installations that were non-chronological and non-traditional, reflecting the relationships he saw between various artistic expressions. He presented visual connections—between past and present, between classical form and romantic expression—as dialogues on the walls of the museum. Giving equal focus to American and European artists, Phillips juxtaposed works by Winslow Homer, Thomas Eakins, Maurice Prendergast, James Abbott McNeill Whistler, and Albert Pinkham Ryder with canvases by Pierre Bonnard, Peter Ilsted and Édouard Vuillard. He exhibited watercolors by John Marin with paintings by Cézanne, and works by van Gogh with El Greco’s The Repentant St. Peter (circa 1600–05). Phillips’ vision brought together "congenial spirits among the artists," and his ideas still guide the museum today.

The Phillips Collection is also known for its groups of works by artists who Phillips particularly favored. For example, he was overwhelmed by Bonnard's expressive use of color, acquiring 17 paintings by the artist. Cubist pioneer Braque is represented by 13 paintings, including the monumental still-life The Round Table (1929). The collection has an equal number of works by Klee, such as Arab Song (1932) and Picture Album (1937), as well as seven pieces by abstract expressionist artist Mark Rothko.

Augustus Vincent Tack, Time and Timelessness (The Spirit of Creation), 1943-1944, oil on canvas. Phillips was among the first to recognize Tack's paintings, the museum has more than 40 of his works.

The Rothko Room, the first public space dedicated solely to the artist's work, was designed by Phillips in keeping with Rothko's expressed preference for exhibiting his large, luminous paintings in a small, intimate space, saturating the room with color and sensation. The Rothko Room is the only existing installation for the artist's work in collaboration with the artist himself. Phillips was initially attracted to Rothko's work because he saw the use of color as similar to Bonard's.

Throughout his lifetime, Phillips acquired paintings by many artists who were not fully recognized at the time, among them John Marin, Georgia O'Keeffe, Arthur Dove, Nicolas de Staël, Milton Avery, Betty Lane and Augustus Vincent Tack. By purchasing works by such promising but unknown artists, Phillips provided them with the means to continue painting. He formed close bonds with and subsidized several artists who are prominently featured in the collection—Dove and Marin in particular—and consistently purchased works by artists and students for what he called his "encouragement collection." The museum also served as a visual haven for artists such as Richard Diebenkorn, Gene Davis, and Kenneth Noland. In a 1982 tribute to the museum, Noland acknowledged, "I’ve spent many hours of many days in this home of art. You can be with art in the Phillips as in no other place I know."

In 2013, the museum opened its second permanent installation, a room covered in wax by artist Wolfgang Laib. Though Laib's work is often interpreted as evocative of nature, the piece, which is 6 feet by 7 feet and illuminated by one bare bulb, can also seem harsh and enigmatic. Laib became interested in the site-specific installation, which requires about 500 pounds of wax, after visiting the museum's Rothko Room.

The Phillips Collection is housed in a distinctive space in Washington's Dupont Circle neighborhood. From the beginning, Duncan Phillips exhibited his collection in special galleries at his home. A Georgian Revival house dating to 1897, the Phillips house now forms the southern section of the museum building, and is listed on the National Register of Historic Places.

Over time, the building was adapted to include more galleries and offices, particularly after the Phillips family moved out in 1930. In 1960, Phillips added a modernist wing. This addition was renovated and reconceived in 1989 with the aid of a $1.5 million gift from Japanese businessman Yasuhiro Goh. The addition, now known as the Goh Annex, is named in his honor.

To accommodate its ever-growing collection of art, audiences, and activities, the Phillips completed a major building project in April 2006. With 65 percent of the added 30,000 square feet (2,800 m2) located below ground, the expansion preserves the intimate scale and residential quality that distinguishes The Phillips Collection, as well as respects the character of the Dupont Circle neighborhood. The new spaces, known as the Sant Building, incorporate expanded galleries, among them the first to accommodate larger-scale post-1950s work; a 180-seat auditorium for lectures, films, and events; an outdoor courtyard; and a new shop and café. The architect for the new building was Arthur Cotton Moore. Two of the most notable elements of the new structure are the winding white interior staircase and the external sculptural stone relief of a bird relating to Georges Braque's painting Bird from the museum's collection.

Since the museum's early years, when art classes were held on the third floor of the house, significant attention has been given to educational outreach. Today, the museum features an active schedule of lectures, gallery talks, classes, parent/child workshops, and teacher training programs. It also reaches out to the community through initiatives such as Art Links to Literacy, combining programs for underserved students at District of Columbia Public Schools and their parents and caregivers with professional development for their teachers. These and other ventures are facilitated by new exhibition spaces for student art, an art activity room for hands-on education projects, and an art technology lab for developing interactive resources based on the museum's educational programs.

Phillips After 5 combines live jazz, gallery talks, modern art, and a cash bar on the first Thursday of every month from 5 to 8:30 pm.

Sunday Concerts, founded in 1941, offer classical chamber music in the intimacy of the museum's oak-paneled Music Room. The concerts have featured ensembles and soloists ranging from Glenn Gould, Jessye Norman, Jean-Yves Thibaudet, and Emanuel Ax to some of the most talented young musicians performing today. Sunday Concerts are held from October through May. They begin promptly at 4 pm.

In December 2009, The Pink Line Project put together a multimedia evening called "Art Is _____." Visitors were invited to remix the definition of art, using Duncan Phillips's writings as source material. Guests were able to send text messages to a computer engineer who projected them onto a wall, creating a group art project.

When Duncan Phillips died in 1966, his wife Marjorie succeeded him as museum director. Their son, Laughlin, became director in 1972. He led The Phillips Collection through a multi-year program to ensure the physical and financial security of the collection, renovate and enlarge the museum buildings, expand and professionalize the staff, conduct research on the collection, and make the Phillips more accessible to the public. In 1992, Charles S. Moffett, a noted author and curator, was named director. Moffett was directly involved with the presentation of several ambitious exhibitions during his six-year tenure, including the memorable "Impressionists on the Seine: A Celebration of Renoir’s Luncheon of the Boating Party" in 1996.

Jay Gates became director in 1998. Under his leadership, The Phillips Collection continued to grow and broaden its presence in Washington, D.C., across the country, and internationally. Dorothy M. Kosinski, previously a curator at the Dallas Museum of Art, took over as director in May 2008.

All content from Kiddle encyclopedia articles (including the article images and facts) can be freely used under Attribution-ShareAlike license, unless stated otherwise. Cite this article:
The Phillips Collection Facts for Kids. Kiddle Encyclopedia.