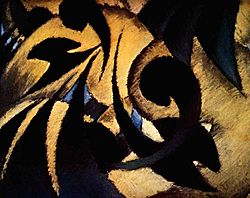 Arthur Garfield Dove (August 2, 1880 – November 23, 1946) was an American artist. An early American modernist, he was the first American abstract painter to be shown publicly. In recent years it has become clear that Manierre Dawson was probably slightly ahead of Dove and Kandinsky in producing pure abstracts.

All content from Kiddle encyclopedia articles (including the article images and facts) can be freely used under Attribution-ShareAlike license, unless stated otherwise. Cite this article:
Arthur Dove Facts for Kids. Kiddle Encyclopedia.