Canandaigua (/ˌkænənˈdeɪɡwə/; Utaʼnaráhkhwaʼ in Tuscarora) is a city in Ontario County, New York, United States. Its population was 10,545 at the 2010 census. It is the county seat of Ontario County; some administrative offices are at the county complex in the adjacent town of Hopewell.

The name Canandaigua is derived from the Seneca name of its historic village here, spelled variously Kanandarque, Ganandogan, Ga-nun-da-gwa, or Konondaigua, which was established long before any European Americans came to the area. In a modern transcription, the historic village is rendered as tganǫdæ:gwęh, which means "place selected for a settlement" or "at the chosen town".

The city is surrounded by the Town of Canandaigua. The City of Canandaigua is on the northern end of Canandaigua Lake, one of the Finger Lakes, 24 miles (39 km) southeast of Rochester, 68 miles (109 km) west of Syracuse, and 93 miles (150 km) east of Buffalo. Parts of six neighboring towns also share the Canandaigua mailing address and 14424 ZIP code.

Developed near Canandaigua Lake at the site of the historic Seneca village Ganandogan, by the mid-19th century Canandaigua was an important railroad junction and home port for several steamboats that operated on the lake. After the Civil War, local industries included two brick works, the Lisk Manufacturing Company, several mills, and the regionally prominent McKechnie Brewery. The shire town of the original county of western New York, Canandaigua was the site of the trial of Susan B. Anthony in 1873 on charges of voting illegally because only men were allowed to vote.

French explorers Robert de La Salle and René de Bréhant de Galinée visited the region in 1669. They recorded seeing a burning spring known to the Seneca in what is now known as the nearby Town of Bristol. The water of the spring appears to burn as a flame; this is caused by escaping natural gas, and several such burning springs have been noted in the Canandaigua area.

The city was the historic site of Kanandaigua, a Seneca village. The village site was later used for West Avenue Cemetery. The village was formed by former residents of the Ganondagan Seneca village, destroyed by the French in 1687.

The Kanandaigua Seneca village, consisting of 23 longhouses, was destroyed during the American Revolutionary War by the Sullivan Expedition on September 10, 1779. American rebels had mounted this attack in reprisal for an attack by Mohawk and other British allies on Cherry Valley in the eastern part of the territory. The American forces attacked Iroquois villages throughout western New York, destroying 40 and burning the winter stores of the people. The Iroquois fled to Fort Niagara as refugees, and many died of starvation that winter.

After the war, pioneer settlers came from eastern New York and New England. They founded the city's public high school, Canandaigua Academy, in 1791. On November 11, 1794, the Treaty of Canandaigua was signed in the town by representatives of the United States of America and the Six Nations of the Iroquois; the British had ceded Iroquois lands without consulting them, and the US forced most of the Iroquois Native Americans out of the state. It established two small reservations for the Seneca and Oneida, who had been allies of the American rebels, but they suffered considerable enmity and discrimination after the war.

In 1807–1808, Jessie Hawley, a flour merchant from Geneva, served 20 months in the Canandaigua debtors' prison. He was an early proponent of building a canal through the Mohawk Valley to improve shipping and connect the Hudson River with Lake Erie. During his time in prison, he published 14 influential essays on the canal concept.

Stephen A. Douglas was a student at Canandaigua Academy between 1830 and January 1833; he later moved west and was elected as US senator from Illinois. He was the 1860 Democratic Party presidential nominee, losing to Republican Abraham Lincoln.

This area of New York was a center of activism for women's suffrage and other progressive movements. In 1873, the Ontario County Courthouse, located in the City of Canandaigua, was the site of the trial of Susan B. Anthony, a leader of the women's suffrage movement, who was arrested for voting at a time when only men were allowed to vote. She was found guilty and fined $100, which she did not pay.

John Willys, born in Canandaigua in 1873, operated a bicycle sales and repair shop there, before later becoming a successful automobile manufacturer.

On October 30, 1900, Theodore Roosevelt made a brief stop in Canandaigua to give a campaign speech at Atwater Park.

In 1945, Marvin Sands founded Canandaigua Wine Company. With a growing American market for wine in the late 20th century, the company expanded rapidly through acquisitions in the 1980s and 1990s. It joined other companies in forming Constellation Brands, and became the world's largest wine and spirits distributor. In 2006, Canandaigua Wine Company rebranded as Centerra Wine Co., a subsidiary of Constellation Wines, U.S., Inc.

On March 14, 2006, President George W. Bush visited Canandaigua, giving speeches at Canandaigua Academy and Ferris Hills, an assisted-living community for seniors. He was describing Medicare Part D for senior citizens. The text of his speech at Ferris Hills can be found here.

The city is at the northern end of Canandaigua Lake, in the Finger Lakes region, the largest wine-producing area in New York. 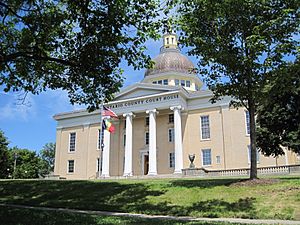 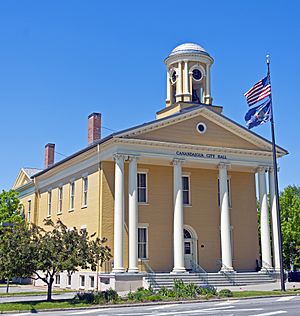 Within the City of Canandaigua, the following buildings, properties and districts are listed on the National Register of Historic Places:

All content from Kiddle encyclopedia articles (including the article images and facts) can be freely used under Attribution-ShareAlike license, unless stated otherwise. Cite this article:
Canandaigua, New York Facts for Kids. Kiddle Encyclopedia.