Kids Encyclopedia Facts
Not to be confused with Ontario, New York.

Ontario County is a county in the U.S. state of New York. As of the 2010 census, the population was 107,931. The county seat is Canandaigua.

In 2006, Progressive Farmer rated Ontario County as the "Best Place to Live" in the U.S., for its "great schools, low crime, excellent health care" and its proximity to Rochester.

This area was long controlled by the Seneca people, one of the Five Nations of the Iroquois Confederacy, or Haudenosaunee. They were forced to cede most of their land to the United States after the American Revolutionary War.

When the English established counties in New York Province in 1683, they designated Albany County as including all the northern part of New York State, the present State of Vermont, and, in theory, extending westward to the Pacific Ocean. On July 3, 1766 Cumberland County was organized, and on March 16, 1770 Gloucester County was founded, both containing territory now included in the state of Vermont. The English claims were their assertion; the Five and then Six Nations of the Iroquois occupied and controlled most of the territory in central and western New York until after the Revolutionary War.

As New York was more heavily settled in the 18th century, the colonial government organized additional counties, but European settlement did not proceed very far west past Little Falls, New York, about halfway through the Mohawk Valley, until after the revolutionary war. This area was temporarily part of Montgomery County, renamed after the war for an American officer. Seth Reed, a Colonel in the Battle of Bunker Hill, moved here with his family as a pioneer between 1787 and 1795. See also Geneva (town), New York

Land-hungry settlers from New England swept into upstate and western New York after the Revolution, as nearly five million acres of new lands were available for purchase since the Iroquois were forced to cede most of their territories to the United States. Four tribes had allied with the British and were mostly resettled in Canada: the Mohawk, Onondaga, Seneca and Cayuga.

In 1789, Ontario County was split off from Montgomery. The territory first organized as Ontario County was much larger than at present and ran south from the shore of Lake Ontario. As the area was settled, new counties were organized. The following counties were rapidly organized from this territory in the first decades after the war: Allegany, Cattaraugus, Chautauqua, Erie, Genesee, Livingston, Monroe, Niagara, Orleans, Steuben, Wyoming, and Yates counties, and parts of Schuyler and Wayne counties.

In 1821, portions of Genesee County were combined with portions of Ontario County to create Livingston and Monroe counties.

This frontier area was part of the evangelistic activities during the Second Great Awakening of the early 19th century, when Baptist, Methodist and Congregational preachers traveled and organized revivals and camp meetings. In addition, independent sects developed in central and western New York during this period, including the Church of Latter Day Saints and the Shakers. 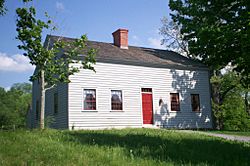 Home of the Joseph Smith, Sr. family in Manchester, known as the "frame home".

Joseph Smith, founder of the Latter Day Saint movement, lived in Manchester in the 1820s on the border with Palmyra. Several events in the early history of the movement occurred in Ontario County. Hill Cumorah in Manchester is where Smith said he discovered the Golden plates said to contain the writings later known as the Book of Mormon. Smith visited the hill each year on the fall equinox (September 22) between 1823 and 1827, and claimed to be instructed by the Angel Moroni. Smith said he was finally permitted to take the record on September 22, 1827. He published the Book of Mormon in Palmyra in 1830. The 110-foot (34 m) hill (which was then unnamed) is on the main road toward Canandaigua from Palmyra to Manchester (modern State Route 21); it was a few miles from Joseph Smith's home.

Ontario County is in western New York State, east of Buffalo, southeast of Rochester, and northwest of Ithaca. The county is within the Finger Lakes Region of the state.

All content from Kiddle encyclopedia articles (including the article images and facts) can be freely used under Attribution-ShareAlike license, unless stated otherwise. Cite this article:
Ontario County, New York Facts for Kids. Kiddle Encyclopedia.