Canandaigua (pronounced "Kan-in-day-gwuh") is a town in Ontario County, New York, United States. The population was 10,020 at the 2010 census. The name is a native word ("Kah-nan-dah-kwe") for "the chosen spot" or "the chosen place."

The town was first settled around 1789. Canandaigua officially became a town in 1791.

The first town meeting was held in April of that year and presided over by the first supervisor, Israel Chapin. Initially, there was little distinction made between the community named Canandaigua and the Town of Canandaigua. Then in 1815, the Village of Canandaigua was officially established; it became a city in 1913.

During the steamboat era, from about 1823 to 1935, passenger vessels travelled on the nearby lake.

Since 1960 the Pageant of Steam steam festival has been held in Canandaigua. 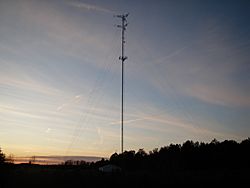 The tallest structure in Canandaigua

Towns and other areas bordering the Town of Canandaigua

Hopewell to its east, Bristol to its south, East Bloomfield to its west, and Farmington to its north.

There were 2,886 households, out of which 35.0% had children under the age of 18 living with them, 62.5% were married couples living together, 7.6% had a female householder with no husband present, and 26.1% were non-families. 19.1% of all households were made up of individuals, and 6.2% had someone living alone who was 65 years of age or older. The average household size was 2.62 and the average family size was 3.03.

Communities and locations in the Town of Canandaigua

All content from Kiddle encyclopedia articles (including the article images and facts) can be freely used under Attribution-ShareAlike license, unless stated otherwise. Cite this article:
Canandaigua (town), New York Facts for Kids. Kiddle Encyclopedia.