Kids Encyclopedia Facts
This page is about the town. For the city, see Geneva, New York.

Geneva is a town in Ontario County, New York, United States. The population was 3,291 at the 2010 census. The actual source of the name is ambiguous.

The Town of Geneva is in the southeastern part of the county and borders the City of Geneva.

Geneva is known for being the home of the New York State Agricultural Experiment Station run by Cornell University.

The town is situated in the territory of the historic Seneca, who had an important village at Kanadaseaga ("Seneca Castle"), at the north end of Seneca Lake. This village was fortified during the Colonial Period as a defense against the French and was later used as a British stronghold during the American Revolution. It was destroyed by the Sullivan Expedition.

Post revolution settlement began around 1878. The town was established from part of the Town of Seneca in 1872.

Seth Reed and his family settled here and owned an 18-mile tract of land in Ontario County between 1787 and 1795 before becoming the earliest settlers of Erie, PA. Colonel Reed had been involved in the Battle of Bunker Hill and the Canada campaign while serving in the Continental Army in the American Revolutionary War. His latter experiences in this region of New York may have attracted him to Ontario County and Geneva.

In 1806, the village called Geneva began to set itself apart from the town and was incorporated as a village in 1812. A new charter making the Geneva a first class village was granted in 1871.

The loss of this territory to the City of Geneva made the town the smallest in the county. 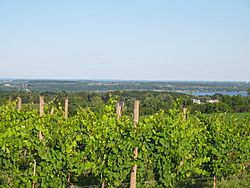 Vineyard in the Town of Geneva

Communities and locations in the Town of Geneva

All content from Kiddle encyclopedia articles (including the article images and facts) can be freely used under Attribution-ShareAlike license, unless stated otherwise. Cite this article:
Geneva (town), New York Facts for Kids. Kiddle Encyclopedia.