An 1841 engraving of Cumorah (looking south), where Joseph Smith said he was given golden plates by an angel named Moroni, on the west side, near the peak. 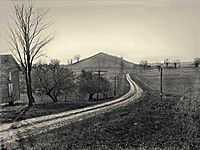 Photograph of the hill by George Edward Anderson, 1907

Cumorah (/kəˈmɔːrə/; also known as Mormon Hill, Gold Bible Hill, and Inspiration Point) is a drumlin in Manchester, New York, United States, where Joseph Smith said he found a set of golden plates which he translated into English and published as the Book of Mormon.

In the text of the Book of Mormon, "Cumorah" is a hill located in a land of the same name, which is "a land of many waters, rivers and fountains". In this hill, a Book of Mormon figure, Mormon, deposited a number of metal plates containing the record of his nation of Nephites, just prior to their final battle with the Lamanites in which at least 230,000 people were killed.

Early Latter Day Saints assumed that the Cumorah in New York was the same Cumorah described in the Book of Mormon, based largely on a letter written by Oliver Cowdery (Letter VII), published in the July 1835 Messenger and Advocate and reprinted several times at the direction of Joseph Smith. In the early-20th century, scholars from the Reorganized Church of Jesus Christ of Latter Day Saints (RLDS Church) and The Church of Jesus Christ of Latter-day Saints (LDS Church) began to speculate that there were two such hills and that final battle in the Book of Mormon took place on a hill in southern Mexico, Central America, or South America. The LDS Church has no official position on the matter, and while these hypotheses are not held by some leaders and members of the LDS Church, they are firmly espoused by others.

In the official account of Joseph Smith it is stated that Manchester, Ontario County, New York, is the location of the encounter with Angel Moroni. 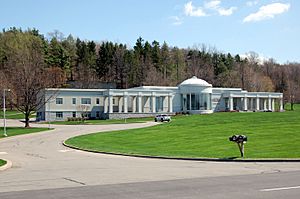 The statue of Moroni atop Hill Cumorah in Western New York.

Smith visited the hill each year on September 22 between 1823 and 1827 and said he was instructed by a "holy messenger", whom Smith identified as the Angel Moroni. Smith was finally allowed to take the record on September 22, 1827. Eleven other men gave written testimony that they had also seen the plates and held them in their hands.

The hill, which was unnamed prior to 1829, is situated a few miles from Smith's boyhood home on a farm that was then owned by a local farmer, Alonzo Sanders. This farm was 4 miles (6.4 km) south of Palmyra, on the main road toward Canandaigua from Palmyra to Manchester, and is not far from Carangrie Creek and the Clyde River. According to geologists, the hill was formed during the retreat of the Ice Age glaciers, and it rises approximately 110 feet (34 m) above the surrounding valley floor.

Since 1829, the Latter Day Saints have called the hill "Cumorah", and local non-Mormons have called it "Mormon Hill" or "Gold Bible Hill". The hill has also been called "Inspiration Point". The hill and surrounding land was purchased in the 1920s by the LDS Church under the direction of church president Heber J. Grant. The transaction involved two separate purchases: the purchase of the "Inglis farm"; and the purchase of the "Sexton farm". The Inglis farm consisted of 96 acres (39 ha) on both sides of the Canandaigua–Palmyra road and encompassed one third of the western edge of the hill. The 187-acre (76 ha) Sexton farm was purchased from the heirs of Pliny T. Sexton, who owned the "Mormon Hill farm" encompassing the remainder of the hill.

The LDS Church has constructed a monument that is topped with a statue of the Angel Moroni on the top of the hill, and there is a visitor's interpretative center at the base of the hill.

Supposed location of the plates

The stone box, described by Joseph Smith, as the location where the plates were found has not been located on the hill. In a letter, Oliver Cowdery gives the location as "the west side of the hill, not far from the top". Shortly after Smith announced he had the plates, some local residents unsuccessfully searched the hill for a freshly dug hole that could have contained the plates. They did note a significantly sized hole on the east side of the hill that had been dug years previously by treasure seekers. 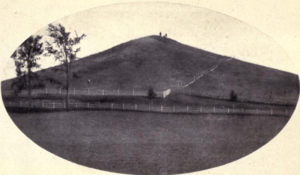 In the Book of Mormon, Cumorah is mentioned in six verses, five in chapter 6 and one in chapter 8 of a subpart of the book, which is also known as the Book of Mormon. According to the record, Mormon is one of the final caretakers of the records of his people. He combined and abridged the records and engraved them on gold plates. His people, called the Nephites, were near to being destroyed by the Lamanites who had had many previous wars with the Nephites. Mormon wrote to the leader of the Lamanites to ask that he may gather his "people unto the land of Cumorah, by a hill which was called Cumorah, and there we could give them battle." Cumorah is described as being in a land with "many waters, rivers, and fountains".

The leader of the Lamanites agreed, and all of the Nephites gathered together, including their women and children. Mormon wrote, "And when three hundred and eighty and four years had passed away [since the sign of the birth of Christ], we had gathered in all the remainder of our people unto the land of Cumorah." Mormon then hid all of the records of his people in the hill, except for the plates that he was currently writing on, which he gave to his son Moroni.

The Lamanites then attacked the Nephites, who were led by twenty-three men each with ten thousand men under their command. Mormon recorded that all but 24 of the Nephites had been killed, "even all my people, save it were those twenty and four who were with me", except for those who fled to the south or defected to the Lamanites.

Mormon then records his mourning for his people and a last message to those who will read his record later, then again turns the unburied records over to his son Moroni. Moroni records, "after the great and tremendous battle at Cumorah, behold, the Nephites who had escaped into the country southward were hunted by the Lamanites, until they were all destroyed. And my father also was killed by them, and I even remain alone to write the sad tale of the destruction of my people."

This hill, known as "Cumorah" among the Nephites, was called "Ramah" (/ˈrɑːmɑː/) by the Jaredites:

Moroni lived several years after recording the destruction of his people. He translated and abridged the plates which were the record of the Jaredites as the Book of Ether on to the plates that he was keeping. During this process, he wrote, "Omer ... passed by the hill of Shim, and came over by the place where the Nephites were destroyed," and "it came to pass that the army of Coriantumr did pitch their tents by the hill Ramah; and it was that same hill where my father Mormon did hide up the records unto the Lord, which were sacred." These passages identify the Nephite hill Cumorah as the same hill where the Jaredites had fought their final battle.

For over 100 years, Mormons generally accepted the New York setting for the Hill Cumorah. Since the early-20th century, there has been discussion within the Latter Day Saint movement about whether Hill Cumorah in New York is the same place described in the Book of Mormon, or whether there are two hills of the same name—one in New York and one in either Southern Mexico, Central America, or South America. Mormon archeologists overwhelmingly favor the "two Cumorahs" theory, while conservative theologians and some leaders prefer the view that only one Cumorah exists. Some non-Mormon scholars have provided alternative theories for the origin of the name Cumorah.

At least ten different accounts refer to certain events that occurred at the hill Cumorah in New York. According to the account of Brigham Young, the angel instructed Joseph Smith to carry the golden plates back to the hill Cumorah. When Smith and Oliver Cowdery arrived, "the hill opened, and they walked into a cave, in which there was a large and spacious room." The account continues by saying they found "more plates than probably many wagon loads; they were piled up in the corners and along the walls." When they first entered, the Sword of Laban was hanging on the wall. When they re-entered later, the Sword of Laban was unsheathed and resting on top of the newly delivered golden plates. The sword had an inscription on it that said the sword "will never be sheathed again until the kingdoms of this world become the kingdom of our God and his Christ." It has been suggested by Mesoamerican Cumorah advocates that these events occurred in a vision rather than a physical visit.

There has been no on-site archaeological research at Cumorah in New York.

According to David Palmer, a list of topographic and geographic criteria for Cumorah has been developed. These criteria are as follows:

Alternative origin of the name 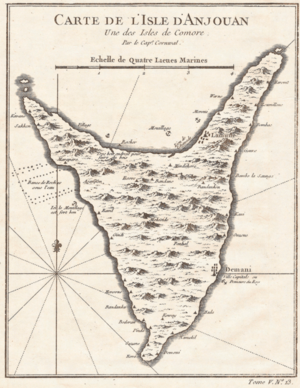 Grant H. Palmer suggested that Smith borrowed the name "Cumorah" through his study of the treasure-hunting stories of Captain William Kidd,.. Previous to announcing his discovery of the Book of Mormon, Smith had spent several years employed as a treasure seeker. Kidd is considered to have started the treasure digging phenomenon after burying treasure on Gardiner's Island in New York soon after returning from a voyage to the Indian Ocean, where he lost a third of his crew to cholera on the Comoros islands. However, the Comoros islands are not mentioned in the primary inspiration for Captain Kidd stories and legends, Charles Johnson's 1724 book, A General History of the Robberies and Murders of the Most Notorious Pirates. Palmer also suggested that Smith borrowed the name of a settlement in the Comoros—Moroni—and applied it to the angel which led him to the golden plates; however, Moroni is also not mentioned in Johnson's 1724 book,

Others posit that this line of argument commits the logical error of appeal to probability. They argue it is highly unlikely that Smith had access to material which would have referred to the then-small settlement of Moroni. However, other Mormon authors have suggested that the ancestors of the Nephite people may have encountered the Comoros islands on their initial voyage from the Arabian Peninsula to the western hemisphere, and that the Nephite civilization therefore may have retained a collective knowledge of the names "Comoros" and "Moroni".

A minority of LDS scholars, some of whom specialize in 19th-century American literature, place the original literary setting for the Book of Mormon among the mythic mound builders of North America. Recent archaeological discoveries in North America, together with new historical information in the Joseph Smith Papers project, have led to a resurgence of interest in the traditional New York setting.

Currently, the 283-acre (1.15 km2) site near Palmyra, New York, hosts the annual Hill Cumorah Pageant. This large, outdoor Latter-day Saint pageant typically occurs in early July and is free to the public. The pageant can trace its history back to 1935. The current title, America's Witness for Christ, was first used in 1937. This was a play by H. Wayne Driggs that remained the basic text of the pageant until 1987. The 1987 revision, which is still used, was written in large part by Orson Scott Card. The Hill Cumorah Pageant planned to have its final performance in 2020, but because of the coronavirus pandemic it is rescheduled for July 8–10 and 13-17, 2021.

All content from Kiddle encyclopedia articles (including the article images and facts) can be freely used under Attribution-ShareAlike license, unless stated otherwise. Cite this article:
Cumorah Facts for Kids. Kiddle Encyclopedia.