Cattaraugus County is a county in the western part of the U.S. state of New York, with one side bordering Pennsylvania. As of the 2010 census, the population was 80,317. The county seat is Little Valley. The county was created in 1808 and later organized in 1817.

Cattaraugus County comprises the Olean, NY Micropolitan Statistical Area, which is included in the Buffalo-Cheektowaga, NY Combined Statistical Area. Within its boundaries are the Allegany Indian Reservation of the Seneca Nation of New York, and the Allegany State Park. The Allegheny River runs through the county. 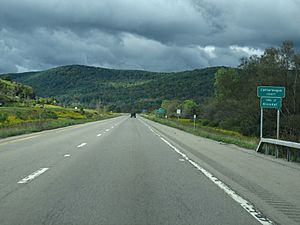 The largely unsettled territory was the traditional homeland of the now-extinct Wenrohronon Indians and later occupied by the Seneca people, one of the five Nations of the Haudenosaunee. During the colonial era, it was claimed by at least three territories: New York Colony, Massachusetts Bay Colony and Pennsylvania Colony, each of which extended their colonial claims to the west until after the Revolutionary War.

When counties were established in the province of New York in 1683, the territory of Cattaraugus County was included within the very large Albany County. This was an enormous county, including the northern part of New York as well as all of the present state of Vermont and, in theory, extending westward to the Pacific Ocean. As additional areas were settled, this county was reduced on July 3, 1766 by the creation of Cumberland County, and on March 16, 1770 by the creation of Gloucester County, both containing territory now in Vermont.

On March 12, 1772, what was left of Albany County was split into three parts, one remaining under the name Albany County. One of the other pieces, Tryon County, contained the western portion (and thus, since no western boundary was specified, theoretically still extended west to the Pacific). The eastern boundary of Tryon County was approximately five miles west of the present city of Schenectady. The county included the western part of the Adirondack Mountains and the area west of the West Branch of the Delaware River. The area then designated as Tryon County is represented in the 21st century by 37 counties of New York. The county was named for William Tryon, colonial governor of New York.

In the years prior to 1776, most of the Loyalists in Tryon County fled across the Niagara Frontier into modern day Ontario, Canada. In 1784, following the peace treaty that ended the American Revolutionary War (and a treaty with Massachusetts that finally settled who owned Western New York), the name of Tryon County was changed to Montgomery County in honor of the general, Richard Montgomery, who had captured several places in Canada and died attempting to capture the city of Quebec. This replaced the name of the hated British governor.

In practice, however, these counties did not cover modern Cattaraugus County or Western New York. Most of that area lay within the Indian Reserve established in the Treaty of Fort Stanwix by the British; it was intended to be reserved for Native Americans and was ruled off-limits to European settlement.

The newly independent United States sought to extinguish native reserves after the British ceded their territory east of the Mississippi River and south of the Great Lakes to the United States. This included Iroquois territory in New York; the four nations that had been allies of the British mostly relocated to Ontario, where the Crown gave them land grants in some compensation for losses. The Treaty of Canandaigua, in 1794, extinguished what was left of native title, with the exception of several reservations, three of which were at least partially located in what is now Cattaraugus County.

Cattaraugus County was formed in 1808, split off from Genesee County. At first there was no county government due to the sparse population. From 1812 to 1814, Cattaraugus County was incorporated in Allegany County; from 1814 to 1817, records of the county were divided between Belmont (Allegany County) and Buffalo (then in Niagara County). The name "Cattaraugus" derives from a Seneca word for "bad smelling banks," and was named for the "odor of natural gas leaking from rock seams." In 1817, a county government was established for Cattaraugus County in the southwestern corner of the town of Hebe, now Ellicottville.

Numerous towns in the county are named after agents of the Holland Land Company, including Ellicottville (Joseph Ellicott), Franklinville (William Temple Franklin, a speculator and grandson of Benjamin Franklin), and Otto and East Otto (Jacob Otto). The first settlement in the county was in Olean. After 1860, the county seat was moved to Little Valley.

The Allegany Indian Reservation is within the county boundaries and is one of two controlled by the federally recognized Seneca Nation of New York in the western part of the state; the Seneca's other territories, Cattaraugus and Oil Springs, are both partially within county boundaries. South of Salamanca, New York, a small city located within the reservation, is Allegany State Park, which is contiguous with the Allegheny National Forest in Pennsylvania.

Cattaraugus County is in the southwestern part of the state, immediately north of the Pennsylvania border. The southern part of Cattaraugus County is the only area of western New York that was not covered by the last ice age glaciation . It is noticeably more rugged than neighboring areas that had peaks rounded and valleys filled by the glacier. The entire area is a dissected plateau of Pennsylvanian and Mississippian age, but appears mountainous to the casual observer.

The plateau is an extension of the Allegany Plateau from nearby Pennsylvania. Southern Cattaraugus County is part of the same oil field, and petroleum was formerly a resource of the area. It is now mostly played out, but natural gas continues to be extracted.

The northern border of the county is formed by Cattaraugus Creek and the Allegheny River arises in the county.

Cattaraugus County-Olean Airport is located outside of Olean located in the Town of Ischua.

Intercity bus service is provided through Coach USA, which runs through the county on its twice-daily Jamestown to Olean route (with connections to Buffalo and New York City). Trailways offers a once-daily north-to-south run between Buffalo and points south in Pennsylvania.

The county does not have a unified public transit system. The Seneca Nation serves much of the county through its own bus line, which connects its reservations; another service, the Olean Area Transit System, connects the cities of Salamanca and Olean.

There is no regular passenger rail service in Cattaraugus County; Amtrak does not serve the county. The WNY & PA Railroad, based in Olean, provides freight service on most of the rail routes in Cattaraugus County; the New York and Lake Erie Railroad serves the northwest corner and the Buffalo and Pittsburgh Railroad runs a north-to-south route.

Two geological formations, both called "Rock City," have the appearance of a town laid out with streets. One is in Olean and the other is in Little Valley.

Olean is the largest city in the county and is the major center for business. Ski country runs through Cattaraugus County; two ski resorts, popular with Canadians, lie in the town of Ellicottville: Holiday Valley Resort and HoliMont; Cattaraugus County once had numerous ski resorts within its bounds, scattered throughout the county, before contracting into Ellicottville alone by 1980. In addition, several snowmobile trails cross the county, including the Pat McGee Trail, a flagship for the county's trail system, and the North Country Trail.

Cattaraugus County's current promotional nickname is the Enchanted Mountains. The county's heights are mostly described as hills; it has only two comparatively small "mountains" (Mount Seneca and Mount Tuscarora, both in Allegany State Park). During the 1980s, the county used the slogan Naturally Yours to Enjoy.

Cattaraugus County is considered part of Appalachia, as well as Western New York, upstate New York, the Southern Tier, the Twin Tiers and the Buffalo-Niagara-Cattaraugus Combined Statistical Area. As a result of being at a geographic crossroads, the people of Cattaraugus County speak a variety of accents, ranging from mild variants of Appalachian English to Inland Northern American English, with a handful of people speaking in the more loud and nasal Buffalo English.

A large Amish community is located in the western part of the county. A portion of this community maintains an exceptionally older order that eschews indoor plumbing, which, combined with a small number of Seneca who still live on traditional subsistence, gives the county a high rate of homes without indoor plumbing compared to nearby counties. 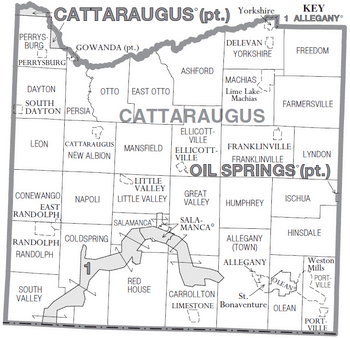 All content from Kiddle encyclopedia articles (including the article images and facts) can be freely used under Attribution-ShareAlike license, unless stated otherwise. Cite this article:
Cattaraugus County, New York Facts for Kids. Kiddle Encyclopedia.