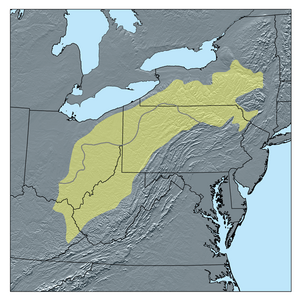 Map of the Allegheny Plateau. The gray line differentiates the glaciated (northern) and unglaciated (southern) sections of the plateau.

The plateau extends southward into western West Virginia, eastern Kentucky and Tennessee where it is instead called the Cumberland Plateau.

The plateau terminates in the east at the Allegheny Mountains, which are the highest ridges just west of the Allegheny Front. The Front extends from central Pennsylvania through Maryland and into eastern West Virginia. 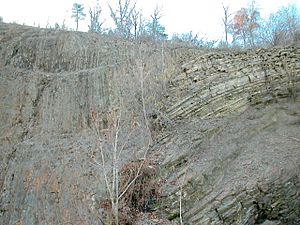 Major fault at the dividing line between the Allegheny Plateau and the true Appalachian Mountains in Williamsport, Pennsylvania

Elevations vary greatly. In the glaciated Allegheny Plateau, relief may only reach one hundred feet or less. In the unglaciated Allegheny Plateau in southeastern Ohio and westernmost West Virginia, relief is typically in the range of two hundred to four hundred feet. Absolute highest elevations in this area are often in the range of 900 to 1,500 feet (270 to 460 m). By the Allegheny Front, however, elevations may reach well over 4,000 feet (1,200 m), with relief of up to 2,000 feet (610 m). 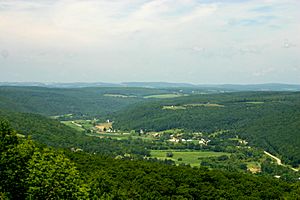 Canisteo River Valley from Pinnacle State Park. Glaciation in this area of the plateau removed the sharp relief that is seen in unglaciated areas of the plateau. The line of the distant peaks approximates the level of a peneplain that was uplifted to form the plateau.

All content from Kiddle encyclopedia articles (including the article images and facts) can be freely used under Attribution-ShareAlike license, unless stated otherwise. Cite this article:
Allegheny Plateau Facts for Kids. Kiddle Encyclopedia.