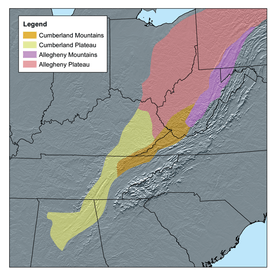 Appalachian zones in the US - USGS

The formation of the plateau began during the Paleozoic Era. Regional uplift during this time caused the area to rise altogether without changing the topography of the land. The eastern side of the plateau appears as a mountain range. This false appearance is due to a very steep slope on the eastern side known as the Allegheny Front. The eastern edge is the highest part of the Appalachian Plateau. In Pennsylvania, the altitude ranges from 1,750 to 3,000 feet and continues to rise toward West Virginia, where the elevation is around 4,800 feet. From West Virginia to Tennessee, the elevation lowers to 3,000 feet and continues slanting downward to 1,000 feet in Alabama. On the western side of the plateau, the elevation is 900 feet in Ohio, increasing to about 2,000 feet in Kentucky. From Kentucky the elevation drops down to 500 feet in northwestern Alabama. The plateau has a slight slant towards the northwest, making it higher on the eastern side.

The rock underlying the Appalachian Plateau consists of a base of Precambrian rock, overlain by sedimentary rock from the Paleozoic Era. On top of the basement is a thick layer, approximately 20,000 feet, of a mixture of Cambrian, Ordovician, and Middle Silurian rock. This rock consists of shale, siltstone, and sandstone. Above this layer is the Upper Silurian evaporate basin, or basin of chemically formed sedimentary rocks. The Plateau fold belt consists of structurally complex Paleozoic strata which were thrust faulted over the younger evaporates.

When the Appalachian mountains were formed, the plateau was lifted. Ridges and valleys all die down underneath the plateau. There are multiple valleys throughout the region which consist of exposed areas of limestone and shale. 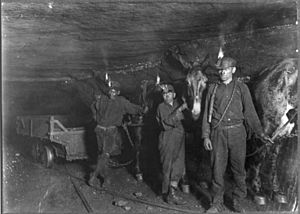 Archaeologists have evidence that Native Americans lived in the Appalachian region more than twelve thousand years ago; however, it is hard to say exactly when the occupants first inhabited the land. Human artifacts were collected near the Meadowcroft Rockshelter in southern Pennsylvania that were at least sixteen thousand years old. Because the early Native Americans were hunter-gatherers living off the land, they left little material traces of their lives behind them. This is why it is so hard for researchers to determine when they settled in this area. Much like many historic Native American tribes, the early Appalachian inhabitants survived as nomads, following their food on a seasonal basis.

Around this period, North America was still recuperating from its last glacial period, and the climate was much different than now. The climate and habitat more closely resembled a tundra, with lower temperatures, numerous conifer trees, and large mammals, such as mammoths and saber-toothed tigers. Eventually, the climate began to warm up again, the large mammals started to disappear, and the vegetation seen more often today began to flourish. These climatic changes made life more sustainable for the Native Americans. They continued to invent new weapons and made advancements in agriculture until the Europeans arrived in North America.

Europeans settled in North America beginning in the seventeenth century. In 1749, Jacob Martin and Steven Sewell were the first Europeans known to settle the Appalachian Plateau, specifically in what is now Pocahontas County in West Virginia. European colonization and competition with the Native Americans resulted in high mortality due to new diseases, as well as more deaths and social disruption due to warfare. After pushing out the Native Americans, the European American settlers developed much of this land for agriculture.

From 1861 to 1865, the Appalachian Plateau suffered from the Civil War, but in comparison to many other parts of the country, little damage was done. During the war, Union forces gained control over a majority of the plateau, and afterwards that possession was not challenged. Only three noteworthy battles occurred in the plateau region during the war, so not much of the land was destroyed.

After the war, the coal industry boomed. Many counties in the Appalachian Plateau region, such as McDowell County in West Virginia, became dominated by coal mining. Coal mining towns were created, and many immigrants were attracted to the region for work. Although mining was good for the economy, deaths were high in the harsh work of the mines. Among the terrible coal incidents was the Monongah mining disaster of 1907.

Protecting the Appalachian Region from damage of human influence has been important in the modern era. Conservationists have been fighting to preserve the wildlife in the Appalachia region. The region has proved that with good care, the flora and fauna can be very resilient. However, back in 1890, the destruction of the Appalachian region's forest was at full-scale with the invention of the railroad, saw-mills, and clear-cutting of trees. This caused major flooding and wildfires to the region and destroyed keystone species across the region. Realizing that the destruction of the forest was becoming a major issue, the government passed the Weeks Act of 1911, which allowed the federal government to purchase private land in order to protect rivers and watersheds in the eastern United States.

The first purchase under this act was the Pisgah National Forest. In 1964, the Wilderness Act expanded protections for millions of acres of federal land, such as the Shining Rock and Linville Gorge. The 1975 Eastern Wilderness Act created expanded protected areas in North Carolina, Virginia, and Tennessee. Today, close to 21% of the region is protected. Conservation groups that are dedicated to preserving the Appalachian Plateau region include the Southern Appalachian Forest Coalition and the Northern Forest Alliance. Ultimately, experts and researchers say the best way to continue protecting the Appalachian region is to incorporate conservation into public education so that people understand and support the benefits of conserving the lands. 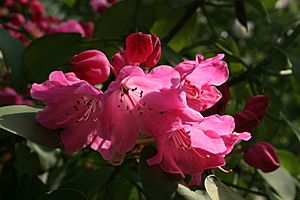 The Appalachian region is home to a wide variety of plant and animal life due to its vast array of climate and conditions giving the Appalachian Plateau region great biodiversity. To the north are many conifers, such as red spruce and balsam fir which can be seen growing at the northernmost latitudes of the Appalachian region. In the northern sections of the plateau at lower elevations you can find northern hardwoods, such as sugar maple and white oak. In southern Appalachia, growth of sycamore, walnut, and hickory trees are common. It is estimated that there is around 2,000 species of flora within the Appalachia region. Flowers vary due to elevation and climate of the area of Appalachia region. Different types of flowers in the northern and southern sections of the Appalachia. Flowers such as rhododendron, azalea and mountain laurel can be found in southern regions while up north trees will bear serviceberry, redbud, sourwood, and many others.

Fauna such as bison and wolves used to be native to the Appalachian region but have subsequently vanished. Elk still are present in some regions. Throughout all of the Appalachian Plateau region there is an abundance of fox, raccoon, wild boar, black bears, white-tailed deer, and beaver. Researchers also found there to be over 200 species of game and song birds including wild turkey, heron, geese, hawks, ducks and many more.

Fungi are also prominent in the Appalachia region. Abundant mushroom and lichen can be found including chanterelle, oyster mushroom and rock tripe. 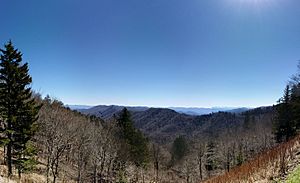 All content from Kiddle encyclopedia articles (including the article images and facts) can be freely used under Attribution-ShareAlike license, unless stated otherwise. Cite this article:
Appalachian Plateau Facts for Kids. Kiddle Encyclopedia.