Rhododendron is a large genus of flowering plants. It includes 1,024 species of woody plants in the heath family (Ericaceae). Some are evergreen, and some are deciduous. They are found mainly in Asia.

Most of them have quite showy flowers. What gardeners know as Azalea is in fact a kind of rhododendron. Many people have rhododendrons in their garden or flower pot. It is the national flower of Nepal. One rhododendron, Rhododendron ponticum, has become an Invasive species in North America.

Rhododendron is a genus of shrubs and small to (rarely) large trees, the smallest species growing to 10–100 cm (4–40 in) tall, and the largest, R. protistum var. giganteum, reported to 30 m (100 ft) tall. The leaves are spirally arranged; leaf size can range from 1–2 cm (0.4–0.8 in) to over 50 cm (20 in), exceptionally 100 cm (40 in) in R. sinogrande. They may be either evergreen or deciduous. In some species, the undersides of the leaves are covered with scales (lepidote) or hairs (indumentum). Some of the best known species are noted for their many clusters of large flowers. There are alpine species with small flowers and small leaves, and tropical species such as section Vireya that often grow as epiphytes. Species in this genus may be part of the heath complex in oak-heath forests in eastern North America.

They have frequently been divided based on the presence or absence of scales on the abaxial (lower) leaf surface (lepidote or elepidote). These scales, unique to subgenus Rhododendron, are modified hairs consisting of a polygonal scale attached by a stalk.

Rhododendron are characterised by having inflorescences with scarious (dry) perulae, a chromosome number of x=13, fruit that has a septicidal capsule, an ovary that is superior (or nearly so), stamens that have no appendages, and agglutinate (clumped) pollen. 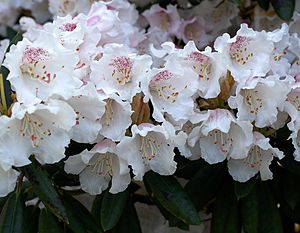 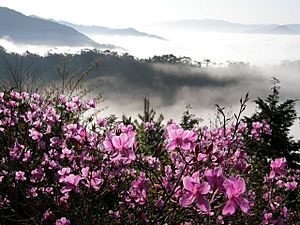 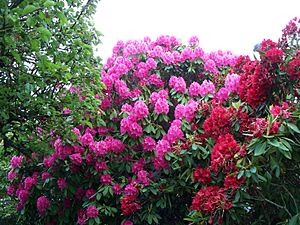 A garden with tall Rhododendrons in Lynnwood, Washington 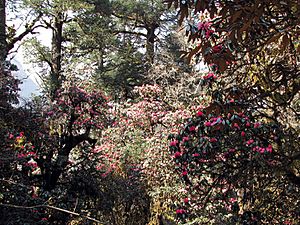 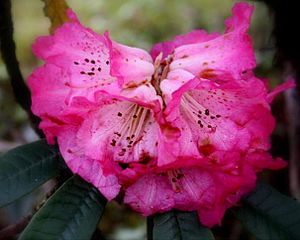 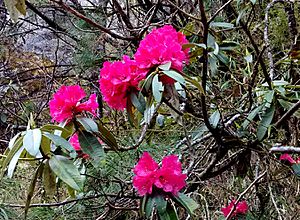 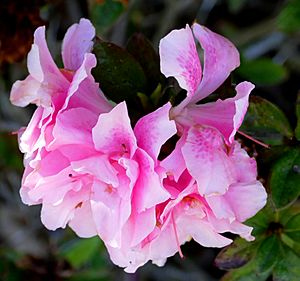 Rhododendron is the largest genus in the family Ericaceae, with as many as 1,024 species, (though estimates vary from 850-1000) and is morphologically diverse. Consequently, the taxonomy has been historically complex.

All content from Kiddle encyclopedia articles (including the article images and facts) can be freely used under Attribution-ShareAlike license, unless stated otherwise. Cite this article:
Rhododendron Facts for Kids. Kiddle Encyclopedia.