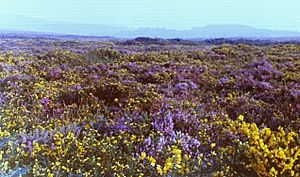 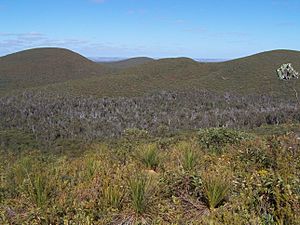 Heath landscape in the Stirling Range, Western Australia, with a dieback-infested valley in the mid ground

A heath or heathland is a shrubland habitat found mainly on low quality, acidic soils. It has open, low growing woody vegetation.

There are some clear differences between heath and moorland. For example moorland has a very peaty topsoil, and it is also free-draining, whereas a heath is not. Moorland is generally related to high-ground heaths with — especially in Great Britain — a cooler and damper climate.

Heathland is common worldwide. They form extensive and diverse communities across Australia in humid and sub-humid areas. Fire regimes with burning maintain the heathlands. Even more diverse though less widespread heath occurs in Southern Africa. Extensive heath communities can also be found in the California chaparral, New Caledonia, central Chile and along the shores of the Mediterranean Sea. In addition to these extensive heath areas, the vegetation type is also found in scattered locations across all continents except Antarctica.

All content from Kiddle encyclopedia articles (including the article images and facts) can be freely used under Attribution-ShareAlike license, unless stated otherwise. Cite this article:
Heath Facts for Kids. Kiddle Encyclopedia.