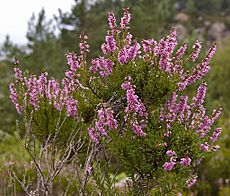 Calluna vulgaris (heather) is the sole species in the genus Calluna in the family Ericaceae.

It is a low-growing perennial shrub growing to 20 to 50 centimetres (7.9 to 19.7 in) tall, or rarely to 1 metre (39 in). It is found widely in Europe and Asia Minor on acidic soils in open sunny situations and in moderate shade.

Heather is the dominant plant on most heaths and moorland in Europe, and in some bog vegetation and acidic pine and oak woodland. It is tolerant of grazing and regenerates following occasional burning. It is often managed in nature reserves and grouse moors by sheep or cattle grazing, and also by light burning.

The flowers emerge in late summer; in wild plants these are normally mauve, but white-flowered plants also occur occasionally.

Heather is an important food source for various sheep and deer which can graze the tips of the plants when snow covers low growing vegetation. Willow Grouse and Red Grouse feed on the young shoots and seeds of this plant. Both adults and larvae of the Heather Beetle Lochmaea suturalis feed on it, and can cause damage. The larvae of a number of Lepidoptera species also feed on the plant.

Heather honey is a highly valued product in moorland and heathland areas, with many beehives being moved there in late summer. It has a strong taste, and an unusual texture. It is thixotropic, being a jelly until stirred, when it becomes a syrup (like other honey), but then sets again to a jelly. This makes the extraction of the honey from the comb difficult, and it is therefore often sold as comb honey.

All content from Kiddle encyclopedia articles (including the article images and facts) can be freely used under Attribution-ShareAlike license, unless stated otherwise. Cite this article:
Calluna Facts for Kids. Kiddle Encyclopedia.