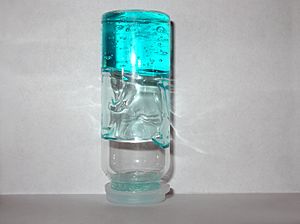 An upturned vial of hair gel

A gel is a semi-solid substance material which usually wobbles.

By weight, gels are mostly liquid. But gels also behave like solids. They have a three-dimensional cross-linked network within the liquid. It is the crosslinks in the fluid that give a gel its structure.

All content from Kiddle encyclopedia articles (including the article images and facts) can be freely used under Attribution-ShareAlike license, unless stated otherwise. Cite this article:
Gel Facts for Kids. Kiddle Encyclopedia.