Freezing rain is the name given to rain that falls when surface temperatures are below freezing. Unlike sleet, a mixture of rain and snow, ice pellets, or hail, freezing rain is made entirely of liquid droplets. The raindrops become supercooled while passing through a sub-freezing layer of air hundreds of meters above the ground, and then freeze upon impact with any surface they encounter, including the ground, trees, electrical wires, and automobiles. The resulting ice, called glaze, can accumulate to a thickness of several centimeters and cover all exposed surfaces. The METAR code for freezing rain is FZRA.

A storm that produces a significant thickness of glaze ice from freezing rain is often referred to as an ice storm. Although these storms are not particularly violent, freezing rain is notorious for causing travel problems on roadways, breaking tree limbs, and downing power lines from the weight of accumulating ice. Downed power lines cause power outages in affected areas while accumulated ice can also pose significant overhead hazards. It is also known for being extremely dangerous to aircraft since the ice can effectively 'remould' the shape of the airfoil and flight control surfaces. 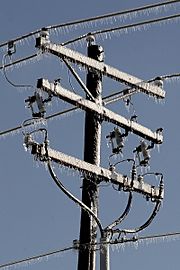 Freezing rain often causes major power outages by forming glaze ice. When the freezing rain or drizzle is light and not prolonged, the ice formed is thin. It usually causes only minor damage, relieving trees of their dead branches etc. When large quantities accumulate, however, it is one of the most dangerous types of winter hazard. When the ice layer exceeds approximately 6.4 mm (0.25 in) , tree limbs with branches heavily coated in ice can break off under the enormous weight and fall onto power lines. Windy conditions and lightning, when present, will exacerbate the damage. Power lines coated with ice become extremely heavy, causing support poles, insulators and lines to break. The ice that forms on roadways makes vehicle travel dangerous. Unlike snow, wet ice provides almost no traction, and vehicles will slide even on gentle slopes. Because freezing rain does not hit the ground as an ice pellet (called "sleet") but still as a rain droplet, it conforms to the shape of the ground, or object such as a tree branch or car. This makes one thick layer of ice, often called "glaze". 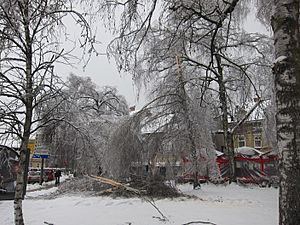 Freezing rain and glaze on a large scale is called an ice storm. Effects on plants can be severe, as they cannot support the weight of the ice. Trees may snap as they are dormant and fragile during winter weather. Pine trees are also victims of ice storms as their needles will catch the ice, but not be able to support the weight. In February 1994, a severe ice storm caused over $1 billion in damage in the Southern United States, primarily in Mississippi, Tennessee, Alabama, and Western North Carolina, especially the Appalachians. One particularly severe ice storm struck eastern Canada and northern parts of New York and New England in the North American ice storm of 1998. 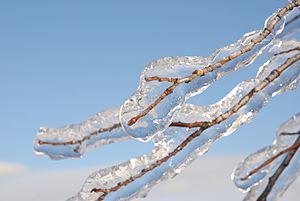 Glaze on a tree in La Malbaie, Quebec 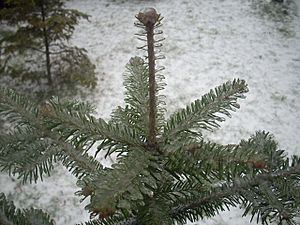 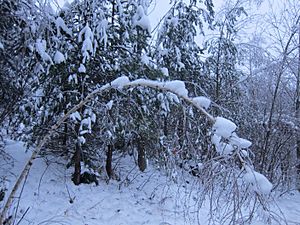 A birch tree is badly bent under a thick layer of glaze ice in Celje, Slovenia.

Freezing rain is considered to be an extreme hazard to aircraft, as it causes very rapid structural icing. Most helicopters and small airplanes lack the necessary deicing equipment to fly in freezing rain of any intensity, and heavy freezing rain can overwhelm even the most sophisticated deicing systems on large airplanes. Icing can increase an aircraft's weight but not typically enough to cause a hazard. The main danger comes from the ice changing the shape of its airfoils. This will reduce lift and increase drag. All three factors increase stalling speed and reduce aircraft performance, making it very difficult to climb or even maintain level altitude.

An aircraft can most easily evade freezing rain by moving into warmer air — under most conditions, this would require aircraft to descend, which it can usually do safely and easily even with a moderate accumulation of structural ice. However, freezing rain is accompanied by a temperature inversion aloft, meaning that aircraft actually need to climb to move into warmer air — a potentially difficult and dangerous task with even a small amount of ice accumulation.

For example, in 1994, American Eagle Flight 4184 encountered heavy air traffic and poor weather that postponed the arrival of this flight at Chicago's O'Hare International Airport, where it was to have landed en route from Indianapolis, Indiana. The ATR-72, a twin-engine turboprop carrying 68 people, entered a holding pattern 105 km or 65 mi southeast of O'Hare. As the plane circled, supercooled cloud droplets, freezing rain or freezing drizzle formed a ridge of ice on the upper surface of its wings, eventually causing the aircraft's autopilot to suddenly disconnect and the pilots to lose control.

All content from Kiddle encyclopedia articles (including the article images and facts) can be freely used under Attribution-ShareAlike license, unless stated otherwise. Cite this article:
Freezing rain Facts for Kids. Kiddle Encyclopedia.